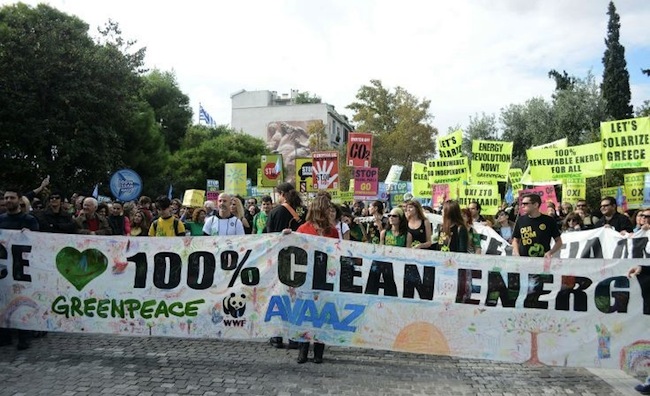 Thousands of Athenians marched in the Greek capital on Sunday to join efforts with millions of people around the world who want to pressure politicians to come to a legally binding agreement at the Paris Climate Conference which will run from November 30 to December 11 and will be attended by Greek Prime Minister Alexis Tsipras.
People of all ages held placards and whistles and chanted slogans for the environment, in the sounds of live music. The march started from Dionysiou Areopagitou Street that meanders around the Acropolis Hill and reached the Greek parliament, where participants called for immediate decisions to address climate change and achieve a better future for all.
A six-year-old boy who came with his parents and was painting a placard with his friends that read “100 pct clean energy”, told ANA-MPA that “we’re here to save the planet”.
The march was organized by WWF, Greenpeace and Avaaz which coordinated all the actions in the Greek capital. According to the three organizations, it is estimated climate change will cost Greece about 700 billion euros by the end of the century.
“Our country, along with other Mediterranean countries, is expected to be hit hard by the consequences of climate change: It will affect agriculture, tourism, all production activities. We will have a significant increase in the frequency and intensity of wildfires, and other extreme weather phenomena,” chief executive of WWF Greece, Dimitris Karavelas, told ANA-MPA.
“Athens’ mobilization was a positive surprise. Thousands of people have sent a message to the political leadership in Greece and the rest of the world in the name of our fellow citizens in Paris, where, for security reasons, demonstrations were banned,” said Nikos Charalambidis, director general at Greenpeace’s Greek office.
(source: ana-mpa)