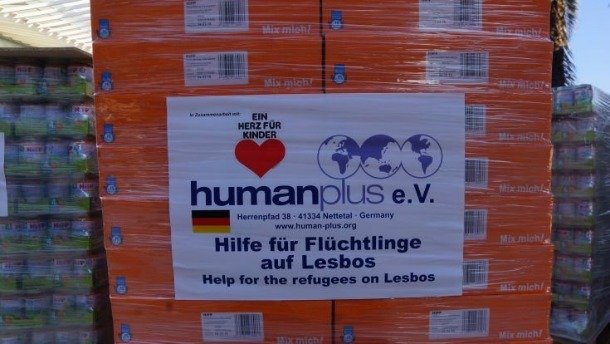 Thirty three tons of humanitarian aid for both refugees and locals was delivered to the municipality and hospital on the island of Lesvos on Tuesday, by two German organizations.
The aid includes four tons of medical supplies for the needs of the hospital of Mytilene, the island’s health centers and the “Mother of God” Foundation, as well as 29 tons of food such as baby food, milk and diapers. The organizations donated medical equipment to monitor pregnant women, as well as clothes which were sent to the foundation.
The entire humanitarian aid was collected by the organization “Human plus” and “A heart for children,” which belongs to the group that issues the German newspaper “Bild.”
Speaking to ANA-MPA, the head of the Giorgios Gennimatas-Agios Dimitrios hospital in Thessaloniki, Pavlos Papadopoulos, who coordinated the efforts to transfer the aid to Lesvos, said that he initially received help from Dr. Anestis Ioannidis, chief executive of “Human Plus” in providing medical care to locals and refugees in Idomeni.
“But when I read what is happening in Lesvos and realized the major obstacles facing the volunteers and organizations I immediately told Mr. Ioannidis we should do something about the island,” Papadopoulos said., adding that the help is not only directed to refugees, but also to struggling locals.
“For help to be effective, it should meet the needs of both the locals and the refugees. If it only covers one group, it will not correspond to our will. We want to offer help to all those in need today on the island,” he added.
Two ferries with 3,278 refugees on board dock at Piraeus port
Two ferries with 3,278 refugees on board arrived on Wednesday, November 18 at Piraeus port. More specifically, “Tera Jet” ferry carried 1,729 refugees and “Ariadni” ferry carried 1,229 refugees from Mytilene and 320 refugees from Chios.
(Source: ANA-MPA)