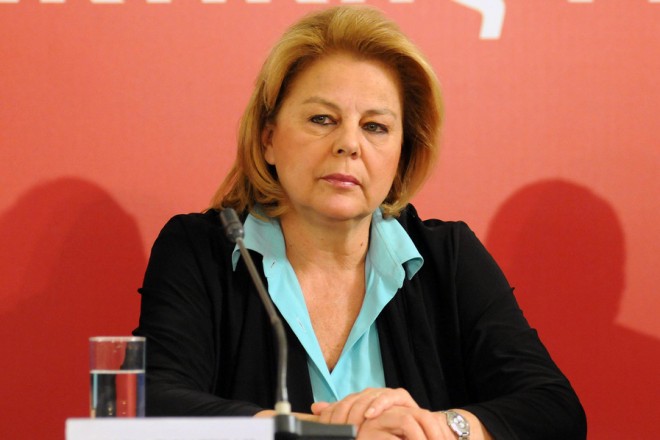 The Chairman of the National Bank of Greece (NBG), Louka Katseli expressed her confidence that the Greek bank recapitalization will successfully go ahead, while addressing the bank’s stockholders on Tuesday.
The European Central Bank’s comprehensive assessment of Greece’s four major banks, Alpha Bank, Eurobank, National Bank of Greece, and Piraeus Banks, found in late October that they will need a total of 4.4 billion euros in the baseline scenario and 14.4 billion euros in the worst case scenario to cover their capital shortfalls. Each of these four institutions must cover at least their share of the baseline scenario to avoid nationalization. In this regard NBG, which is Greece’s biggest bank in terms of assets, must raise 1.576 billion euros.
The remaining funds will be disbursed from the Hellenic Financial Stability Fund (HFSF), which is set to receive 10 billion euros of bailout funds that have been reserved for the bank recapitalization. HFSF is expected to get the funds soon given that the Greek government and its international creditors were able to make an agreement earlier on Tuesday.
While the two sides reached an agreement on foreclosures on primary residencies that will protect around 25% of Greek homeowners who are in debt, they could not reconcile on the issue of non-performing loans and decided to renew talks on the matter in December to avoid compromising the bank recapitalization.
During her speech on Tuesday, Katseli also noted that while the recapitalization will be a positive development, Greece’s banks are set to face two important challenges, namely attracting depositors to return and dealing with non-performing loans. She added that mass foreclosures and seizures of property are not the bank’s goal.

Daniel Craig, the famous and beloved around the world English actor, is expected to come to Greece in June this summer to participate in the filming of the sequel of the film ''Knives Out.''
Business