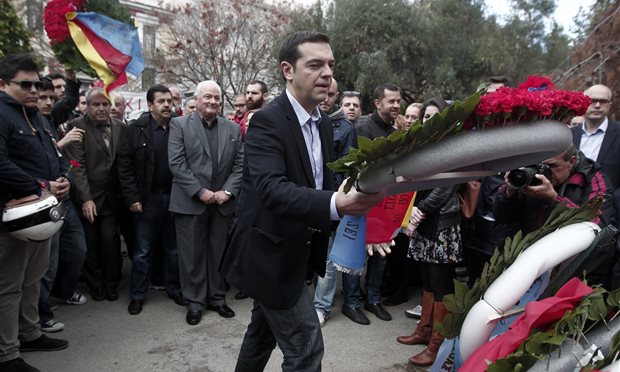 Greek Prime Minister Alexis Tsipras and several SYRIZA officials were met with boos when the PM laid a wreath at the Athens Polytechnic monument on the anniversary of the student uprising on November 17, 1973.
Minor clashes broke out on Tuesday morning when the government delegation arrived at the courtyard of the Polytechnic as a group of anarchists started shouting slogans against the government, showing their disapproval of the politicians being there.
Students tried to push the demonstrators away, generating further tension. The anarchists hurled cups of coffee and bottles of water at the SYRIZA supporters.
Tsipras stayed at the site for only a few minutes after laying the wreath, while Filis and Voutsis made brief public statements to commemorate the day.
Tsipras: We will not allow anarchists and extreme rightists to exploit Polytechneio
Tsipras spoke in parliament on commemoration of the Polytechnic students uprising later on Tuesday saying that the government will now allow anarchists and extreme rightists to exploit the “Polytechneio” struggles for their petty causes.
“We must not let anyone hijack the struggles of our people. We cannot allow that to the supposed anti-authoritarians, or the right wing,” Tsipras said.
Tsipras said that in the first seven months his government fought a tough battle against superior forces and with its position compromised. For the first time, however, people are given the power to claim and hope for a better future, he said.
“We are determined to apply the law for everyone. We are ready to do whatever it takes to restore the legitimacy and social justice in all areas… this is what separates the forces of progress from the conservative forces,” he added.