The Skyros carnival is not widely known around Greece, however its entertainment and rituals make it one of the wildest events of the Greek carnival season.
Describing some of its most peculiar customs and traditions, “Skyros Carnival,” a book dedicated to the event will help you get into the Greek carnival troupe. The image of a goat-masked figure on the cover of the book will make you feel intrigued enough to initiate your own fantasy research on the community-building powers of Skyros’ local ritual. 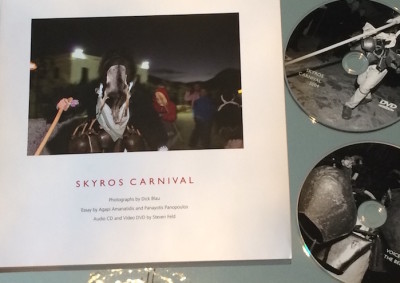 “Skyros Carnival” is a 85 page book that offers a sophisticated narration and interpretation of Skyros’ most important and powerful annual attraction through a dialogue of sounds, still and moving images.
This quite surprising multimedia publication, being the product of galloping inspiration and unfailing teamwork, graciously focuses on a unique visual and acoustic spectacle that is held for at least a century on the Greek island of Skyros, in Sporades.
“The dramatis personae of the carnival in Skyros are a formidable trio,” the contributors of “Skyros Carnival” book say, introducing their project’s main inspiration.
“First, there is the yeros, a part shepherd – part goat figure strung with bells. The yeros is accompanied by the korela, a female figure who is dressed in an assortment of folk bridal and shepherd garments. Finally, there is the frangos, who cuts an outrageous figure with his bizarre appearance,” the authors explain.
Their fascinating experiment, “Skyros Carnival,” aiming to combine the poetics of fieldwork with scientific work, was materialized with the publication series VoxLox, printed by Imago in 2009. The book is embellished with 36 color and 24 black and white photographs taken by University of Wisconsin–Milwaukee Professor of Film Dick Blau.
University of Adelaide visiting research fellow and consulting anthropologist Agapi Amanatidis and University of the Aegean Assistant Professor of Anthropology of Music and Dance Panayotis Panopoulos contributed to the book who will definitely cause its readers to want to visit Skyros at least once.
Furthermore, the powerful video and sound images of University of New Mexico Professor of Anthropology and Music Steven Feld will give readers the opportunity to experience something unique. “Skyros Carnival” readers will witness the rumbling bells of goat-masked “old men” passing through the narrow cobbled village streets finally breaking people’s strict boundaries of inclusion and exclusion through some weird noises that will transform into community.
Info
“Skyros Carnival”
Photographs by Dick Blau
Essay by Agapi Amanatidis and Panayotis Panopoulos
Audio CD and Video DVD by Steven Feld
Published by VoxLox