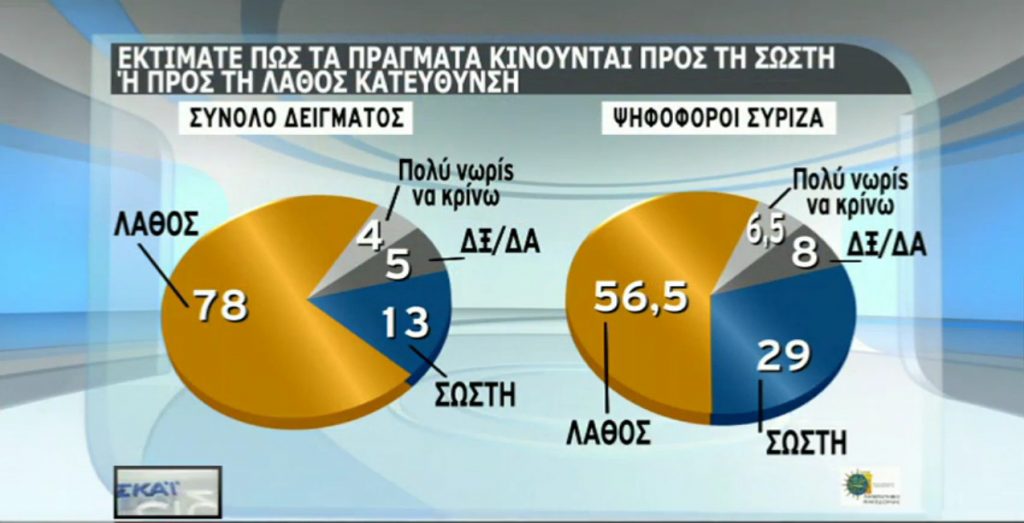 Greeks are pessimistic about the economy and the future in general and they are not satisfied by government policies, a new opinion poll shows.
The poll that was conducted for Skai television, shows that 78 percent of Greeks believe the SYRIZA-ANEL coalition government is moving in the wrong direction. The majority of SYRIZA voters (56.5 percent) also share the same opinion.
Regarding the government’s performance, 86 percent of participants said they are not satisfied, while 70 percent of SYRIZA voters are also dissatisfied.
People in Greece are still suffering from austerity measures, and as a result 50 percent are against the austerity reforms required by the bailout program. The same applies to SYRIZA voters, as half of them don’t want the painful reforms.
Also, 73.5 percent doubt that Greece will get out of the bailout commitments at the end of the government’s four-year term. The same opinion is shared by 55.5 percent of SYRIZA voters.
Furthermore, 70.5 percent of respondents believe that the economic situation in Greece will worsen next year, 21.5 percent believe it will be the same, while only 6.5 percent predict it will improve.