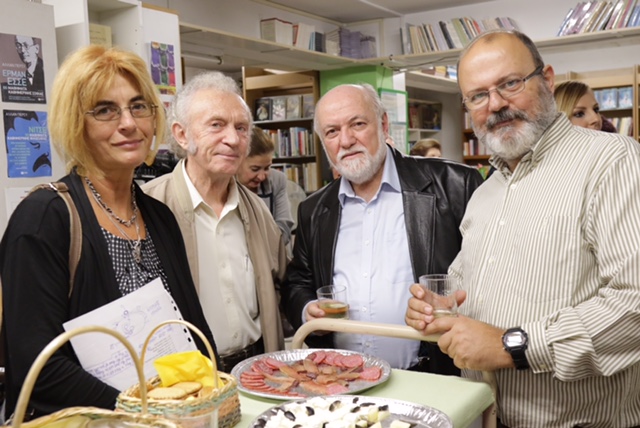 On the occasion of the Bulgarian edition of the poetic anthology “Metamorphoses of Cities” by the renowned Greek-Cypriot poet Michalis Pieris, the Embassy of Bulgaria in Nicosia, Cyprus organized a poetry evening dedicated to Pieris’ oeuvre. The event took place on Thursday, November 5, 2015, at the Soloneion Book Centre in Nicosia.
The poet, Michalis Pieris, and the translator of his works into Bulgarian, Zdravka Mihaylova were in attendance, while the Ambassador Hristo Georgiev gave the introductory speech. The poems were read in both Bulgarian and Greek, with screened English translation by Irena Joannide, while there was also a music program by the Bulgarian violin duet Krasen and Varvara Penevi.
“In the poetry of Pieris there is a cosmopolitan element, which can be appreciated by a Bulgarian – and any foreign – reader, who possesses the genes for mobility, adventure and curiosity. The multicultural is something typical for Cyprus, being as it is on the crossroads between the Levant and the West, a feature shared with Bulgaria, a key crossing point between East and West in the Balkans,” said Zdravka Mihaylova.
Poet, translator and university professor Michalis Pieris was born in Cyprus in 1952. He studied philology and theater in Thessaloniki and in Sydney, and has worked at universities and research centers in Greece, Europe, the United States and Australia. He has published short stories, prose and theatrical plays, as well as dozens of research papers on Medieval, Renaissance and Modern Greek Literature. He is the author of ten poetic collections and has translated foreign poetry and ancient Greek drama into Modern Greek.
He has received many awards and distinctions which among them include the International Poetry Award “Lazio between Europe and the Mediterranean” (2009) of Regione Lazio, Italy, the State Award for Excellence in Letters of the Republic of Cyprus for his overall contribution to literature, culture and the arts (2010), and the designation Commendatore of the Order of the Star of Italian Solidarity by the President of the Italian Republic (2011) for his contribution to promoting Italian culture in Cyprus and furthering the cultural relations between the two countries.