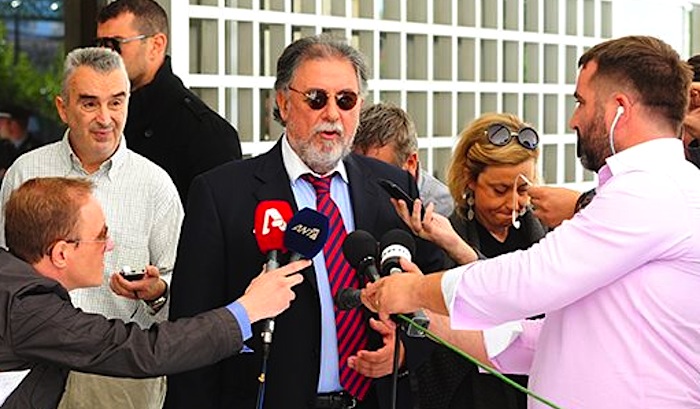 Former citizen protection minister Yiannis Panousis is at the office of Supreme Court Prosecutor Efterpi Goutzamani to report that three SYRIZA members are linked with terrorist and criminal organizations that have threatened his life.
Panousis went to the prosecutor’s office at 11 am on Monday accompanied by Athens Bar Association President Vasilios Alexandris. The former minister alleged that he received the threats four months ago, during his term at the citizen protection office, and had notified Prime Minister Alexis Tsipras.
“I submitted all the information I had at my disposal. I gave them to the prosecutor to make her own assessment. In my opinion there is criminal liability. The information submitted includes names. It is the time that justice protects democracy from corruption and put an end to political carcinomas,” Panousis told reports coming out of the Supreme Court.
According to an interview in Proto Thema newspaper on Sunday, Panousis alleged that three members of the ruling party have ties with terrorist groups and criminal organizations and have threatened his life during his term.
Panousis said that he has sent a file with the names and information to National Intelligence Service Chief Yiannis Roubatis. He also said that he has sent a file with the names of the people involved to a notary public with instructions to make it public in case something happens to him.
The former minister said he has notified current Citizen Protection Minister Nikos Toskas. However, Toskas said he is unaware of the threats. Also, there hasn’t been official reaction on the part of the government.

Panousis said in the interview that he was accused of having police entering and searching the cells of prisoners who belong to the terrorist group Conspiracy of the Cells of Fire. He said he never did that because he didn’t have a warrant from the justice ministry. He said that this was a ploy to discredit him and make him the target of terrorist and criminal groups.
He also backed his claim saying that an anarchist website wrote on Sunday that his allegations are to cover up the abuse of inmates’ rights during his term.