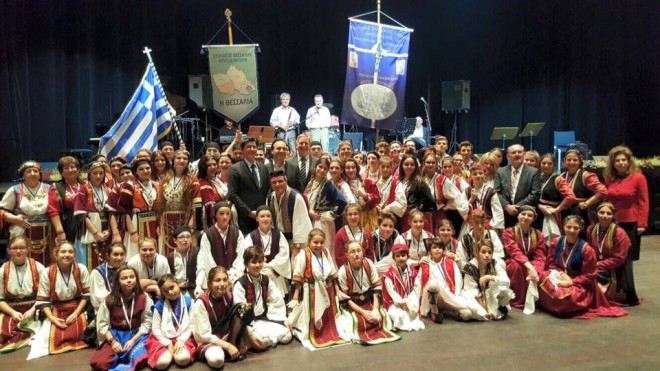 Europe’s Thessalians gathered in the Stadthalle Hall at Gütersloh, Germany to celebrate the Jubilee (100 of Vasilis Tsitsanis). Led by the Thessaly Youth Europe the 11th annual event celebrated that Thessalian traditions, customs, dances and songs are still alive in the heart of Europe, uniting the Greek people from generation to generation.

The Federation of Thessalian Associations in Europe president Diamantis Gikas declared the official opening of the 11th Festival in Gütersloh, stressing the importance and role of Thessalian Associations abroad for the preservation of the Greek identity in countries across the world, while he also welcomed the participants from Greece and Germany.

Dance groups from the Thessalian Associations of Cologne, Dusseldorf and Gütersloh stole the show with their performance of traditional Greek dances. Representatives from the boards of each Association honored the children’s dance groups rewarding them with a Federation medal. The festival organizers also awarded people who have dedicated their lives to the promotion of Vasilis Tsitsanis’ work.

The event peak was the performance of the Vasilis Tsitsanis orchestra, from the Municipality of Trikala.