Greek influence in many parts of modern day Turkey goes as far back as the Byzantine Empire (330 AD – 1453) and Constantinople was the capital, which the Ottomans renamed Istanbul. Although, the Byzantine Empire fell in 1453, to be followed by the Ottoman Empire, you can still find Byzantine and Greek foundations of what was once the known world’s largest metropolis.

Istanbul is a city that is truly magical. A natural blend of the elements of centuries old architecture and tradition in a modern cosmopolitan city. Geographically, Istanbul is the only city that sits on two continents; Europe and Asia, and has so much for a traveler (especially a Greek one) to connect with.
Visit these 9 Must See Spots in Istanbul with 2 not to be missed locations on the Princes’ Islands for your next trip to this delightful country.
1. Beyoğlu District/Neighborhood of Pera

Align yourself with history by visiting the neighborhood of Pera. Many Greeks currently reside in this area located near Taksim Square. Pera sits on the earliest foundations of the city of Istanbul, established during the Byzantine Empire. According to Great Istanbul, Pera, or its original name Peran en Sykai, means fig field of the other side. Pera was established as an Eastern Orthodox colony right next to Constantinople and Ottoman rule did not change the Greek people and culture that have remained there until present day.
A stroll up and down the steep cobbled streets will reveal schools (like the Greek School Zografeion Lyceum), private residences, churches, and a tiny 600 square foot shop called “Kadirga Pasta and Borek Salonu”, Kadirga is loosely translated as Galley in English. Skip your traditional more popular baklava spots and head to Kadirga while you are strolling the city streets and you won’t regret it.

The Kadirga shop-owner places rows and rows of varied baklava in the windowsill display for a visitor to see before even walking through the shop. The display doesn’t outdo the smell and intensity of this freshly made traditional pastry. In Turkey, baklava is traditionally made by filling crushed pistachios in between layers of phyllo dough but the more Greek walnut filled variation of the treat can also be found there.
Before you leave the Beyoğlu District, with baklava in hand, walk through Istiklal Avenue, Independence Avenue, and you will find that millions of people find their way to the avenue daily. This is a beautiful pedestrian avenue where the only form of transportation permitted is your feet. Its length is 1.4 km so if you need something to re-energize you, make sure to stop by your traditional Turkish ice cream stand. When you get there you will find the best part of the Turkish delight is not the ice cream itself but the humorous way in which it is served.

Istiklal is truly unique. Full of independent clothing stores, clothing chains, malls; back alleys with restaurants to get your favorite meze/mezze plates, hookah bars, and traditional Turkish tea shops. You might enjoy a miniature concert by a group of street performers as well. Also on Istiklal you will notice the Greek Consulate housed in a newly renovated historic building.
2. Topkapi Palace

Wander through Topkapi Palace and walk back into time with this preserved treasure. Sultans held court with a large team of eunuchs, princes, concubines, and other civil servants at the palace. To get an understanding of the omnipotence of the sultan during the Ottoman Empire, a team of hundreds of chef apprentices were required to assist in creating an entirely new pastry each time a new sultan succeeded the throne. The Palace and the Harem sit on approximately 700,000 square meters. The Harem, is a separate part of the palace reserved for wives, concubines, and female servants, and was a place where the sultan could engage in whatever his heart desired. This may be considered debauchery to some, as each sultan could have up to 300 concubines at one time residing in the harem.
Now transformed into a museum, Topkapı Palace allows its visitors to witness the history, culture, grandeur, magnificence, and profusion of an Empire which lasted centuries. Topkapi includes a lot of Greek treasures including ancient artifacts, books, and unique architecture.
3. Serpentine Column and Leander’s Tower 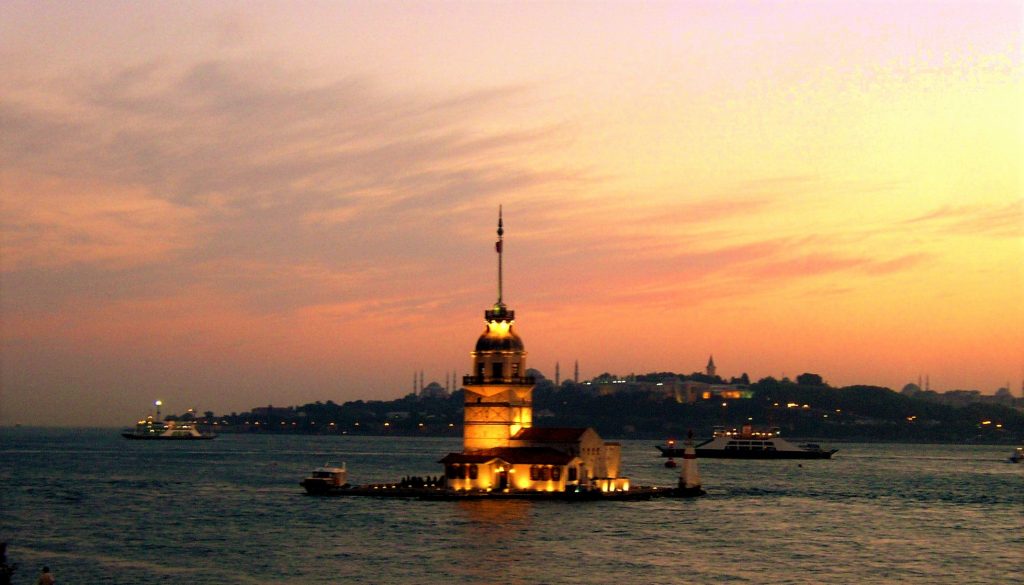 Be astounded as Today’s Zaman mentions, by these two prominent examples of ancient Greek architecture; the Serpentine Column and Leander’s Tower. Approximately 2,500 years-old, the Serpentine Column is said to be İstanbul’s oldest remaining Greek monument. Erected to honor the triumph of the Greeks over the Persians at Plataea, it originally stood at Delphi and was moved to İstanbul in 324 B.C., by Constantine the Great. He sought to mark the declaration of the new capital city of the then-founded Roman Empire under the name Constantinople. Serving as another historical site nearby, Leander’s Tower, often referred to as Maiden’s Tower is a must see, located offshore in the Üsküdar district. It was actually built-in 408 B.C. by an Athenian general to control Persian ships sailing along the Bosphorus.
4. Hagia Sophia

Hagia Sophia or Saint Sophia (from the Greek: Ἁγία Σοφία, “Holy Wisdom”) is a great symbol of Hellenism and many Greeks come to Istanbul today just to visit the former Orthodox patriarchal basilica. The church was later transformed into a mosque, and now is open to the public as a museum. From the date of its dedication in 360 until 1453 this magnificent architectural monument served as the center for Orthodox Christianity in Istanbul for 900 years. The building was a mosque from the 29th of May 1453 until 1931, when it was secularized. It was opened as a museum in 1935 and is considered among the most beautiful man-made structures on earth based on its historical richness and Christian mosaics decorated in gold.
5. The Patriarchal Church of St. George 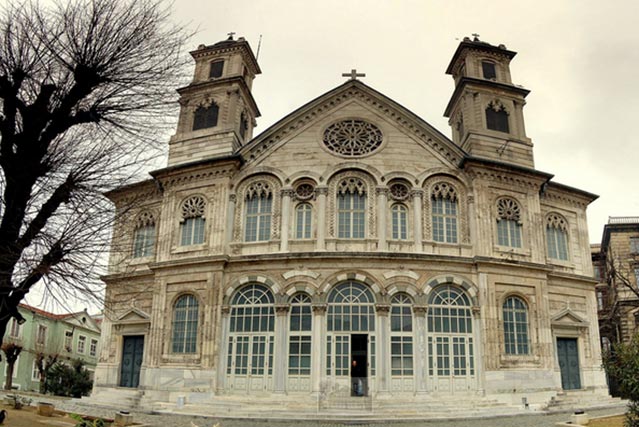 The Church of St. George remains the church of the Ecumenical Patriarchate in Istanbul. The Ecumenical Patriarch, Bartholomew I, is recognized as the spiritual leader of the world’s Eastern Orthodox Christians. The church, dedicated to the Christian martyr Saint George, is the site of numerous important services often performed by the Patriarch himself. Saint George is one of the most venerated saints of the Eastern Orthodox Church and was a soldier in the Roman army.
6. Reina Nightclub 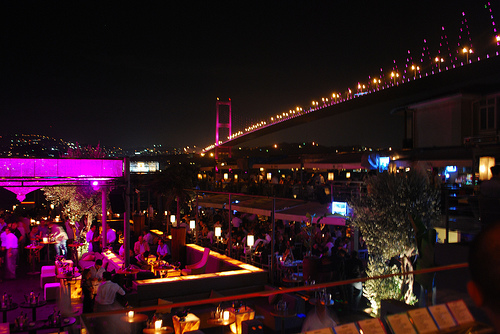 Dance at Reina nightclub in the Ortakoy area of Istanbul, and you will not only find a beautiful view of the Bosphorus bridge, but also a multilevel dance floor, and music from around the world. This is a must see for your Istanbul visit. Reina is also amazingly decorated. The spirit of the nightclub will keep you dancing. And with six major bars, there is not a chance you won’t get your hands on your favorite cocktail.
7. Where to Stay: Lalahan Hotel 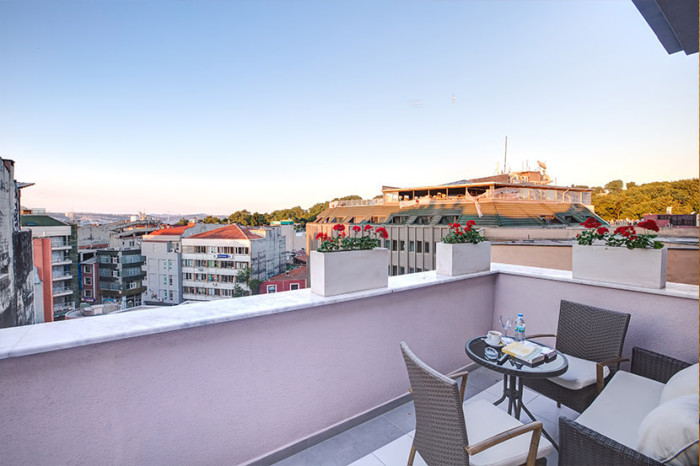 Rest at the Lalahan hotel. If you would like to get access to what Istanbul has to offer, drop your suitcases off at this hotel in Sirkeci, one of Istanbul’s most upcoming neighborhoods. The deluxe rooms offer an outstanding view of the city. Some memorable features are the heated floors in the powder room, beautiful standing shower head, and overall nice modern design juxtaposed with historical Ottoman influences. Most important a caring and attentive staff. Lalahan hotel is located on the historical peninsula, also known as the “Old City” and ancient part of Istanbul, and is a few minutes walking distance to major historical areas such as Hagia Sophia,Topkapi Palace, and the Grand Bazaar.
8. Princes’ Islands

The Princes’ Islands are a popular destination for day trips from Istanbul. In the past Princes’ Islands used to be home to thousands of Greeks and a few Greeks still reside there. The largest island is Prinkipos where the Orphanage of Saint George also happens to be located. There is no traffic on the islands, as the only transport is horse and cart, you may find a comparatively peaceful state away from the city of Istanbul when you arrive. Getting there is relatively easy with just a short ferry ride from both the Asian (at Bostancı and also Kartal) and European sides (from Sirkeci/Eminönü, Kabataş and Yenikapı) of Istanbul.
9. Theological School of Halki
The Halki seminary, formally the Theological School of Halki (Greek: Θεολογική Σχολή Χάλκης), was founded on October 1, 1844 on the island of Halki (now called Heybeliada). It was the main school of theology of the Eastern Orthodox Church’s Ecumenical Patriarchate until the Turkish government stopped its use in 1971. The theological school is located at the top of the island’s Hill of Hope, on the site of the Byzantine-era Monastery of the Holy Trinity. The premises of the school continue to be maintained by the monastery and are used to host conferences. Visitors can see the school and wander around the campus. As of 2015, an international campaign to reopen the theological school is entering its 44th year. Ecumenical Patriarch Bartholomew I of Constantinople is among the school’s alumni.