GRNews
GreekReporter.comGreeceProtesters Clash with Greek Border Police After Refugee Tragedies in the Aegean 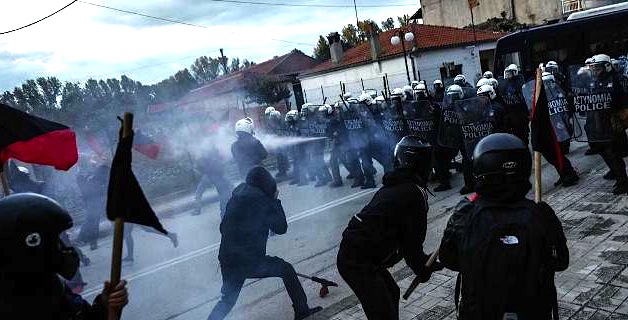 More than 60 refugees and migrants, most of them women and children have died while making the dangerous trip from Turkey to Greece in an attempt to flee conflict stricken countries in the Middle East. The Greek government has been struggling to cope with the increasing number of refugees crossing the border on a daily basis requesting urgent aid from the European Union.
On Saturday, about 500 anti-government protesters arrived at the border between Greece and Turkey, from several towns across the country, clashing with the police officers guarding the 10 kilometer fence that has been set up in the area. Luckily, no injuries or arrests were reported. The protesters demanded that the government bring down the fence in order to help refugees cross the Greek border and safely reach northern European countries. The police officers were attacked with rocks and responded with tear gas and stun grenades.
Meanwhile, the Greek government has stated that the fence needs to remain in place for “practical reasons.” Furthermore, it urged its European partners to speed up the process of aid so that the country can receive some additional support in search and rescue operations.
Antonios Sofiadelis, the head of Lesvos’ port authority warned that smugglers were using increasingly dangerous tactics. “Many of the boats are going for scrap and they use them for one last trip,” he told The Associated Press. “Smugglers usually take the boats to the edge of Greek waters and then get picked up by speed boats. The people on the boats usually have no experience at sea.”
He also warned that more fatal accidents are likely to take place over the next months, as the weather conditions worsen. “We have 50 to 60 crossings a day to Lesvos and sometimes half of those boats are in distress. We typically have five or six rescue operations every day. We simply can’t be everywhere at the same time. So unless something changes on the Turkish coast, there will be more deaths.”
(with information from CTV news)