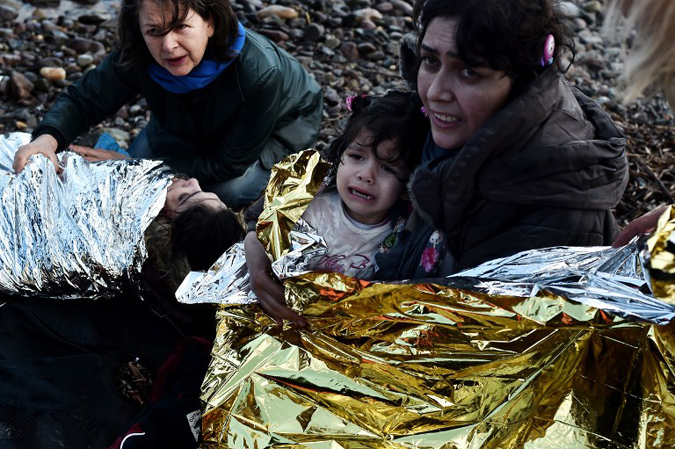 A new deadly shipwreck in Greek waters left four more refugees dead and allegedly 38 more missing on Wednesday as winds in the Aegean Sea reached 8 points on the Beaufort scale.
A wooden boat carrying about 300 refugees — according to survivors — from the Turkish coast capsized due to strong winds north of the island of Lesvos. The hull overturned leaving the passengers struggling in the cold waters.
The full force of the Lesvos coast guard along with merchant ships and fishing boats reacted immediately and went to the site of the wreck the castaways, with many women and children among them. They rescued 242 people while two children and one adult man were found dead. Also, a five-year-old girl who had been rescued passed away in the hospital later on.
Many survivors were taken to the Mytilene hospital where 18 children are currently hospitalized, with three of them in the Intensive Care Unit. The ports of Molyvos and Petra on Lesvos turned into outdoor hospitals as Greek authorities and volunteers provided first aid to many of the survivors.
The Hellenic Coast Guard and Frontex is searching for 38 people who are confirmed missing by survivors.
Around 5,000 refugees dock at Piraeus port
Approximately 5,000 refugees from Mytilene arrived early on Thursday at Piraeus port in the aftermath of yesterday’s tragedy in the sea region north of Lesvos.
More specifically, 1,995 refugees disembarked from “Blue Star Patmos,” 1,359 disembarked from “Blue Star 1,” 867 from “Nisos Rhodos” and 687 from “Nisos Mykonos.”