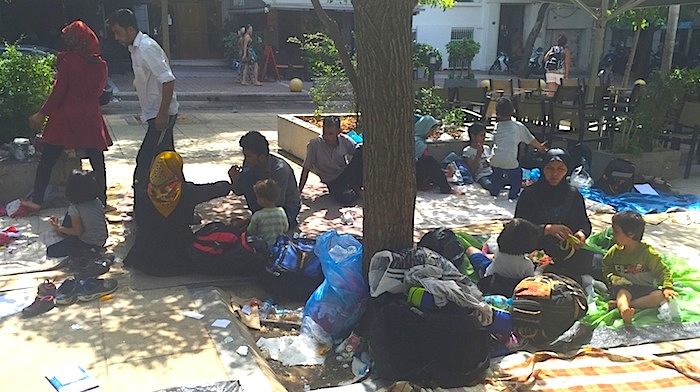 The European Union — in an effort to ease the burden on Greece and eastern European countries caused by the influx of migrants –says it will set up 100,000 places in reception centers in Greece and along the migrants’ route through the Balkans.

European Commission President Jean-Claude Juncker said early Monday after an emergency summit Sunday in Brussels with several leaders of EU nations, including German Chancellor Angela Merkel and the leaders of non-EU eastern European countries, that 50,000 places would be created in Greece and another 50,000 throughout the Balkans.

Juncker said the reception places will be vital in providing shelter, registering the migrants and helping better manage the flow of the migrants.

“This is one of the greatest litmus tests Europe has ever faced,” Merkel said Monday about the continent’s migrant crisis, which some see as a border security problem and others view as a humanitarian challenge.

Juncker issued a statement Monday with nearly 20 proposals, including a plan for the speedy exchange of information to coordinate efforts on processing the migrants through the various countries.

The mini gathering of central and eastern European leaders Sunday was sought by Chancellor Merkel, who has voiced concern for migrants as winter sets in.

The meeting was the latest in a series of top-level EU meetings to find a unified approach on how to best deal with the thousands of migrants streaming into the EU every day.

On Sunday, Croatia Interior Ministry spokesman Domagoj Dzigulovic said a record 11,500 migrants entered the country Saturday — the most in a single day since the flow of migrants began in mid-September. Police said the country has seen nearly 250,000 enter the country since then.

Migrants turned to Croatia after Hungary erected a barbed-wire fence along its border with Serbia.

“Every day counts,” Juncker said Sunday in an interview in German weekly newspaper Bild am Sonntag. “Otherwise we will soon see families in cold rivers in the Balkans perish miserably.”

Some EU lawmakers have complained that all states should attend the meeting and that France’s absence in particular could limit progress on a plan.

More than 680,000 migrants and refugees have crossed to Europe by sea so far this year, fleeing war and poverty in the Middle East, Africa and Asia, according to the International Organization for Migration.

“The challenge now is to slow down the flow of migration and to bring our external borders under control,” Juncker told Bild. “We must also make it clear that people who arrive at our borders who are not looking for international protection have no right to enter the EU.”

Bulgaria, Serbia and Romania said they would close their borders if Germany or other countries shut the door on refugees.

Serbian Prime Minister Aleksandar Vucic said Sunday Serbia would not “put up any walls” but suggested his country will not agree to be the only migrant stop if countries farther west close their borders.

At the Brezice camp in Slovenia near the border with Croatia, U.N. refugee agency (UNHCR) spokesman Babar Baloch urged leaders to come up with a system to register and screen newcomers when they first enter Europe, rather than piecemeal along the way.

“But also very important is to help Syria’s neighboring countries where there are around 4 million refugees,” Baloch said. “These people don’t need to take these risky journeys if there are legal pathways to come to Europe.”

The lack of a common policy is straining ties among European leaders, raising questions about the EU’s future.

Rights group Amnesty International said the 28-country bloc could not afford to end another meeting without an agreed plan.

“As winter looms, the sight of thousands of refugees sleeping rough as they make their way through Europe represents a damning indictment of the European Union’s failure to offer a coordinated response to the refugee crisis,” said John Dalhuisen, Amnesty’s director for Europe and Central Asia.

The continent is experiencing the worst migration crisis since World War II.
At least three migrants — two children and a woman — drowned on Sunday when their boat sank off the Greek island of Lesbos, the coast guard said, the latest fatalities in Europe’s refugee crisis which has claimed nearly 3,000 lives.

Around a dozen others, mostly Afghans, are still missing after the rickety vessel, carrying 60 people, went down at dawn as it made the perilous crossing from Turkey, according to the Greek coast guard.
Also Sunday, the bodies of 29 people thought to be migrants were discovered on beaches near a city 160 kilometers (100 miles) east of Tripoli, the Red Crescent said.

“Local residents told us about bodies on the beaches around Zliten,” spokesman Mohamed al-Misrati told the French news agency AFP. “We discovered 25 bodies, then another four.”

Misrati did not give any further details about the nationality of the deceased, but the Tripoli authorities’ official news agency reported that they were from Africa.
(source: VOA)