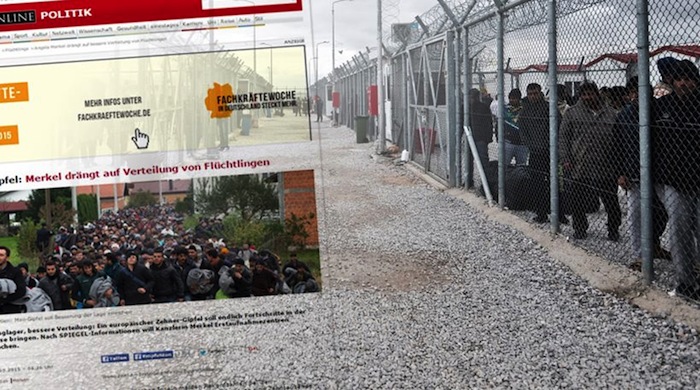 The European Commission is planning to create a huge refugee reception center in Athens, Greece, to address the great influx of migrants in the country, according to German weekly news magazine Der Spiegel.
The center is designed to host 40,000 – 50,000 people inside the premises of a former Olympic site of the Greek capital, operating under the authority of the European Agency for the Management of Operational Cooperation at the External Borders of the Member States of the European Union (Frontex) and the Office of the United Nations High Commissioner for Refugees (UNHCR).
According to the German report, the Greek government has already expressed its serious concerns regarding the existing centers’ transfer from the Greek islands of Lesvos and Kos to Athens.
“[Angela] Merkel aims to achieve a substantial improvement for these hotspots’ function during the mini summit meeting that will be held in Brussels on Sunday. The Chancellor wishes the distribution of refugees within EU to be done directly from these preliminary reception centers. Among other things, information leaflets in Arabic are designed to be shared in order for the refugees to be able to trust the EU mechanism,” Spiegel reads while it also adds: “Meanwhile in Greece, the majority of the 4,000 refugees arriving daily on the Greek islands do not apply for asylum either because of their fear to be deported or perhaps of their concern to be sent to a European country in which they do not wish to live.”
“[Jean-Claude] Juncker and Merkel have to convince the Greek Government to cooperate. Greece’s Prime Minister Alexis Tsipras fears that these hotspot centers could create social unrest as they may remind people of concentration camps. Beyond this, an invasion of foreign officials would awaken bad memories of the Greek debt crisis and the hated troika,” the German magazine reports.

On April 6, 1896, the first modern Olympics were held in Athens, Greece at the Panathenaic Stadium, featuring athletes from 14 countries.
Europe