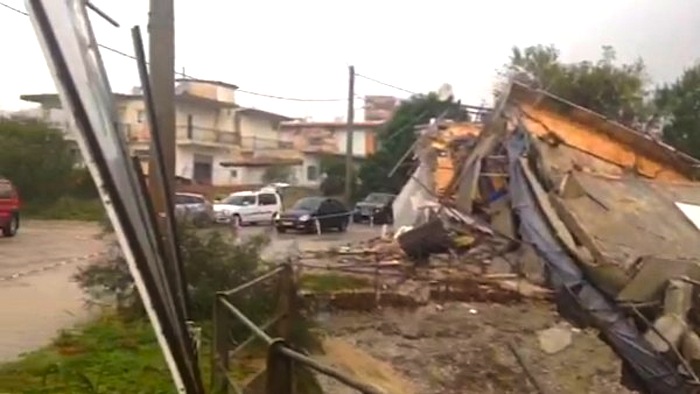 Special emergency units arrived in Western Greece where men of the Greek Fire Department are trying to address the widespread problems caused by today’s severe weather conditions Thursday, October 22. In fact the severe weather made an impact in many sections of Greece.
“Our main concern right now is to address the flooding issues, which have mainly hit Varda (Western Greece), noted the regional prefect, Apostolos Katsifaras.”Unfortunately there has been extensive damage to the agricultural crops and greenhouses, thus significantly affecting the local production,” he added.
According to the district commissioner, issues have also arisen on the highway between Patras and Pyrgos, due to floods. Vehicles are currently moving with great difficulty. 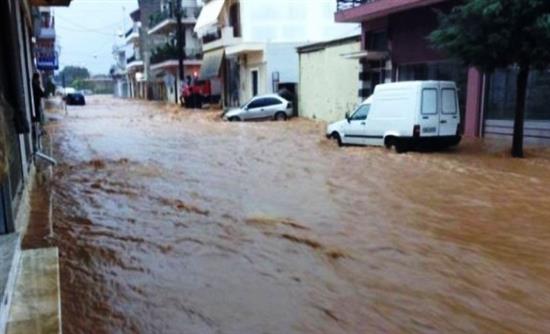 Homes and shops in the area of Vardas are flooded while numerous parked cars have been carried away by the water.
The storm has also hit Athens and nearby areas. A three story building in Kamatero, northwest of Athens collapsed due to the bad weather. A Greek student was swept away by a flood and found trapped underneath a parked car. According to the national Greek broadcaster ERT, the young boy is not in danger, and a unit of the local fire department has arrived on scene to rescue the student.
One Person Drowns in Menidi
A 41-year-old man was declared dead, on Thursday afternoon, when his car flooded in the area of Menidi, north of Athens.
The now deceased man was driving his car while his 70-year-old mother was in the passenger seat, according to Greek media reports. The car was trapped in a torrent between two streets and as a result it flooded.
Police officers, fire fighters, and a medical team with an ambulance rushed to the scene. The 41-year-old however had already passed away. His mother was evacuated safely from the car.
Tornado in the capital’s suburbs
The severe weather hit the northern suburbs of Athens with a tornado, striking near the areas of Tourkovounia and Palaio Psychiko