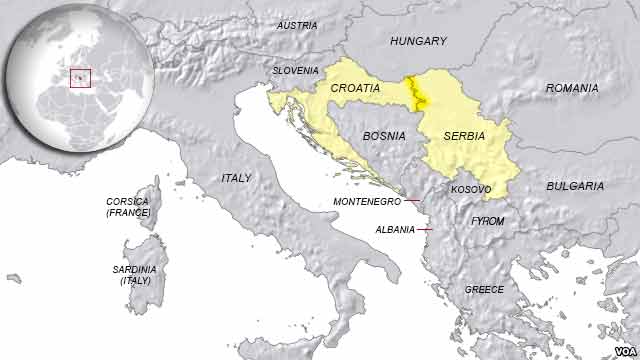 Croatia opened its border with Serbia late Monday afternoon, allowing about 3,000 migrants who had been stranded in cold, rainy conditions for nearly two days to stream through.
Melita Sunjic, a spokeswoman with the U.N. refugee agency (UNHCR) who is on the border at Berkasovo, said that “without any announcement, the borders opened. When the borders opened, everybody rushed” across.
It was not immediately clear why Croatia suddenly permitted the mass entry.

Backlog causes problems
The backlog occurred after Hungary shut down its crossing into Croatia early Saturday, forcing migrants to travel a longer route, through Slovenia, to reach Western European destinations.
“The decision by Hungary to close its border has certainly added to the suffering and misery and the length of the journey for these desperate people,” said Babar Baloch, a spokesman for UNHCR. “There will be challenges if the process becomes slow or we have a backlog of people.”
Sunjic said Monday that about 10,000 migrants entered Serbia from FYROM on Sunday, more than the daily average over the past month, creating a “domino effect” when Slovenia slowed the flow of migrants over the Balkans by restricting their entry numbers to up to 2,500 a day.

‘Big river of people’
“It’s like a big river of people, and if you stop the flow, you will have floods somewhere. That’s what’s happening now,” she said.
About 6,000 people were stuck on Monday in mud and driving rain on the Serbia-Croatia border. Conditions caused alarm among volunteers, who said humanitarian assistance and food were scarce. And more migrants are arriving daily.
Their situation is “awful and hellish,” Sunjic said. “These people are out in the open, they cannot sleep on the ground because of knee-deep mud.”
Others are becoming worried as the European winter sets in for the migrants, many of whom are fleeing war zones such as in Syria, Libya and Afghanistan.
Nighttime temperatures have dropped to around 5 degrees Celsius (41 degrees Fahrenheit) in the migrants’ camp in Calais, and will keep falling in the coming months.

Natacha Bouchart, mayor of the northern French city of Calais, said troops may be needed to cope with the rising number of migrants –- between 4,000 and 6,000, up from 2,500 in June — camped in her city who are trying to reach Britain.
Bouchart told RMC radio Monday that lawlessness in the camps was untenable and said she was speaking with France’s top security official about the situation.
(source: ana-mpa)