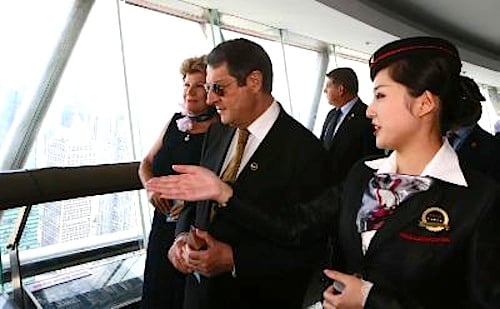 Cyprus President concluded his visit to China, Sunday October 18.
In the morning, President Anastasiades addressed a business forum in Shanghai that was organized by the Cyprus Land and Building Developers Association.
Later on, accompanied by his spouse, Mrs Andri Anastasiades, and the members of the Cypriot delegation, the President visited the Oriental Pearl TV Tower, an impressive landmark, one of the tallest structures and highest observation points in the city, which is regarded as a symbol of Shanghai’s business growth. He also visited the offices of Huawei Technologies Company.
The relations between Nicosia and Beijing are entering a new phase, said Government Spokesman Nikos Christodoulides.
In his remarks to reporters, in Shanghai, where he is accompanying the President of the Republic on his visit there, Christodoulides said that “considering the discussions of the President of the Republic, but also the meetings of the Ministers that accompanied him with officials of the Chinese Government and the Communist Party, we can argue that the relations of Nicosia with Beijing are entering a new phase”.
There is, he noted, obvious political will by both sides to strengthen and upgrade those relations further.
(source: CNA)