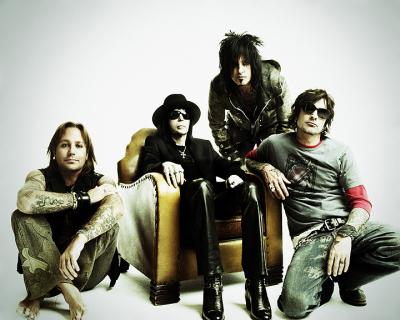 Tommy Lee could not perform in Motley Crue’s latest concert last night (October 16th) due to a severe inflammation of his left wrist, but still managed to come out on stage to greet the fans.

The Greek-American drummer was met with a roar of noise and applause from the fans, who were happy he at least made it out to the venue with the band.

About his injury, Lee said “I am told this injury is temporary and that I will be back on stage very shortly….I’m doing everything in my power to speed up the healing process, I hate not being able to play for you guys!!”

Clearly missing being away from his fans and his drums, Lee hopes to make a speedy recovery, as at the current moment he cannot even properly hold his drumsticks.

Motley Crue will continue their tour until their final performance at the Staples Center in Los Angeles on New Year’s Eve. “The Final Tour” has been very profitable for the band, as the 2014 leg raised $45 million over 72 cities.

Let’s hope Tommy Lee’s wrist heals quickly, and he is able to finish up Motley Crue’s last tour for the fans.