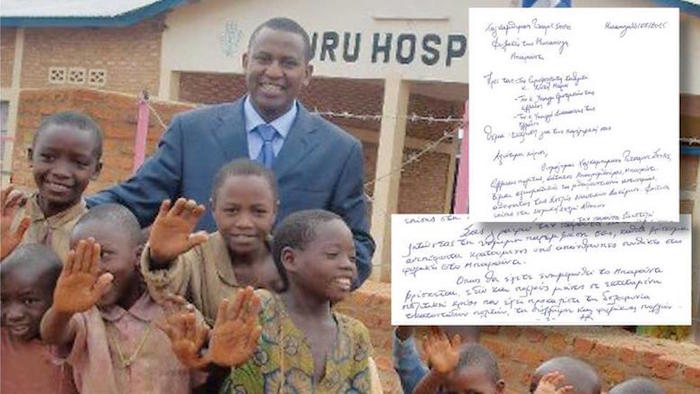 Greek citizen Spyros Chagkampimana has been illegally detained in a maximum security prison in Burundi, Africa, for approximately four months, after he was arrested on June 27. He has been accused of refusing to make use of violent repression against demonstrators as a senior police officer.

The Colonel has been horribly tortured and imprisoned in appalling conditions, without a trial, because he objected to opening fire on demonstrators defying the orders he received from the dictatorial regime.

Burundi was plunged into chaos in May as the former head of the country’s National Intelligence, Major General Godefroid Niyombare, announced that the army had overthrown President Pierre Nkurunziza. The coup attempt followed several days of protests against a third-term bid of Nkurunziza. The President finally responded to the social unrest with political persecutions and murders.

Spyros Chagkampimana traveled to Greece as a political refugee during the civil war between the Hutu’s and Tutsi’s populations. He studied Law at the University of Athens (UOA), working simultaneously at the library of the Athens University of Economics and Business (ASOEE).

Chagkampimana fell so deeply in love with his “second homeland,” Greece, that he learned to speak the Greek language fluently, obtained Greek citizenship, and was even baptized Christian Orthodox.

However, he finally decided to return to Burundi to contribute to the restoration of democracy and the reconstruction of his country, as well as to take part in various child-oriented community projects.

During his time in Greece, Chagkampimana helped several children from Burundi come to study in Greece and has said that “Only education can erase racial animosities. Intellectual capital is what is definitely needed for Burundi’s reconstruction.”

Flights to Greece are starting to be scheduled in hopes that tourists will be able to begin boarding them soon.
Greece

It was April 6, 1941 when Germany launched a massive attack on Greece's northern border after Italy failed to capture the country.