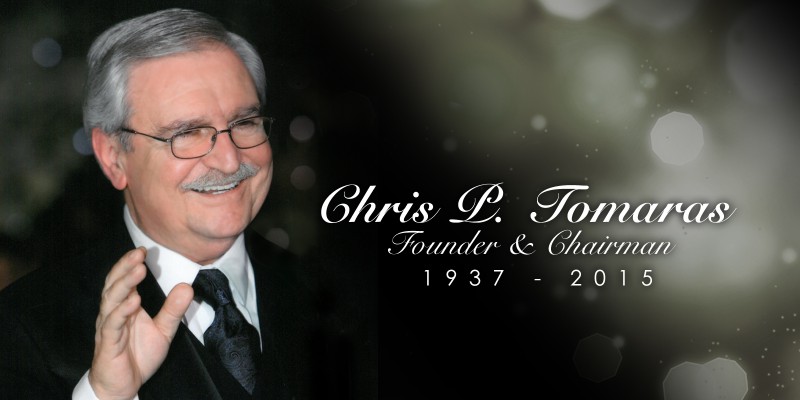 Chicago businessman and philanthropist Chris P. Tomaras passed away on Wednesday in Chicago, leaving behind a legacy that included the Kronos Foods empire and the PanHellenic Scholarship Foundation.

Tomaras invented the ‘Kronomatic’ gyros broiler and after that he established a Greek food business that supplied gyros all over the U.S. and practically made it famous across the country.

Born in 1937 in Drapetsona, a poor neighborhood on the edge of the Piraeus port,  he emigrated to the United States in 1957. After a relatively short stay in New York City, he moved to Birmingham, Alabama and worked in the restaurant business. He moved to Chicago in 1965 and became a part of the city’s thriving Greek American community.

There, he found a prosperous ground for his business acumen and inventiveness. In 1975 he established Kronos Foods. From designing and marketing the ‘Kronomatic’ and the ready-made gyros logs to cleverly promoting gyros and other Greek delicacies, he soon established a food empire that started at a 2,000 square feet space and ended at three manufacturing buildings totaling 250,000 square feet.

In 1995, the Greek American entrepreneur sold Kronos Foods and started Tomaras Investments. Having more free time on his hands, he became involved in the Greek American community. He was a major donor and supporter of several Greek cultural, religious and civic associations with a major gift to the St. Iakovos Camp and Retreat Center of the Greek Orthodox Metropolis of Chicago, where a building is named after him.

He got involved in the Council of Hellenes Abroad (ΣΑΕ) and for 11 years served the Greek Community as its Vice President for North and South America (a 5 times elected position).