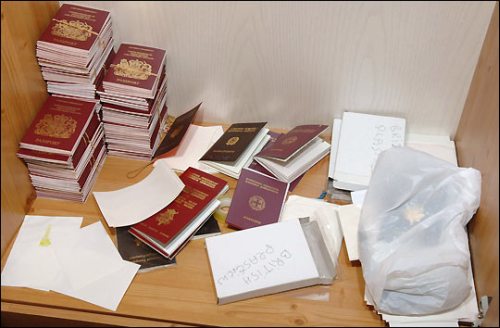 The organized crime unit of the Greek police made 12 arrests regarding the case of a large illegal migrant trafficking ring, which managed to bypass security systems even at airports. The criminal group had specialists who would forge passports and other legal documents, in order to serve their “customers.”
The criminal ring made it clear to migrants that they only provided high quality forged documents in order to help them leave Greece for northern Europe in a matter of days, by airplane or any other means of transport. According to the authorities, the trafficker’s price ranged between 2,300 to 3,000 euros.
According to preliminary police investigation, the circuit had provided documents to at least 100 refugees earning around 300,000 euros. The perpetrators mostly operated in central Athens, where they lured migrants and refugees.
12 Pakistani nationals were arrested in association with the ring and allegedly had special labs where they forged the passports, as investigated by the Greek police. The authorities, are concerned about the quality of the forged documents, which were good enough to pass by strict airport security systems.