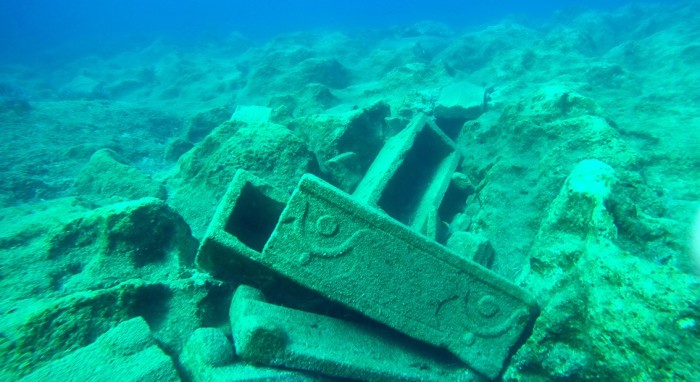 Technological advances used in the bay of Methoni, southwest Greece, and the northern coast of nearby island Sapienza have revealed more details about the geological features of the seabed and supplied further details about two of the known shipwrecks there.
Research was conducted by the ministry of Culture’s Ephorate of Underwater Antiquities in cooperation with the University of Patras’ Geology department, and its Laboratory of Marine Geology and Oceanography, in particular. According to a statement by the ministry of Culture, research in the area had two purposes, “to locate ancient and historical shipwrecks lying on the bottom of the sea or buried in its sediments, and the palaeogeographic reconstruction of the bay of Methoni in the last 10,000 years.”
The ministry said the following equipment was used: a sub-bottom high-resolution profiler, which can locate targets buried several meters below the surface of the seabed; a side-scan sonar to locate objects lying on the seabed surface; a magnetometer to locate metal objects and magnetic targets (including amphorae, the vessels with handles that were used to transport liquids) on the seabed or below it; and a multi-beam echo-sounder to map the depth and underwater terrain in detail, allowing the modelling of the seabed in three-dimensional format.
The equipment allowed the detailed recording of two known shipwrecks off the northern coast of the Sapienza island, possibly of the Roman era, and of the sunken settlement in the Methoni bay which dates to the Middle Bronze Age.
Commenting on the geological findings, the ministry’s announcement said the area “may serve as an excellent natural laboratory for the testing and development of new methodologies and technologies in underwater geoarchaeology and in the management of underwater archaeological sites.” Research on the sunken settlement revealed “the full extent of the settlement, a significant part of which appears to be buried under the seabed sediments, therefore it remains unexplored to the present.
In addition, the sub-bottom profiler identified the geological formation on which the settlement had been built and the geological reason of its submergence under the sea.” According to the ministry’s site, one of the two shipwrecks (“the shipwreck of columns”) lies close to the northern shore of Sapienza, at a depth of 10 meters. It is tentatively dated to the Roman era. Nearby is the “shipwreck of the sarcophagi”, at a depth of 15 meters. It is dated to the 3rd century AD.
(Source: ANA-MPA)