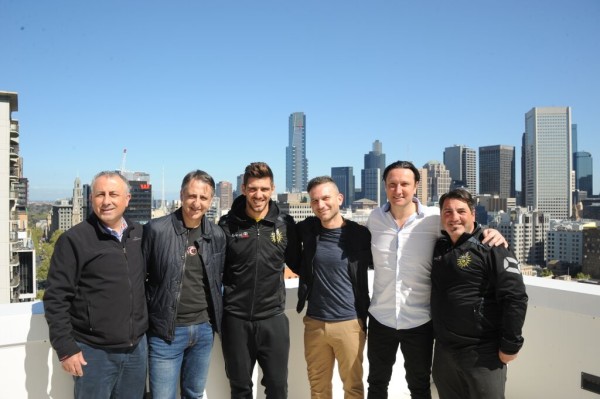 Greek football player Kostas Katsouranis visited the Greek Centre for Contemporary Culture in Melbourne on Saturday, September 26, where he announced the creation of a large football camp for children. He also expressed his appreciation for the hospitality that the Greeks of Melbourne showed him.

Specifically, he stated that in March he would be returning to Melbourne in order to organize the children football camp. “There are many Greeks here who love me and respect me, and I reciprocate these feelings,” he said. “In fact, we will now start preparing the camp, which will be advertised soon. I have discussed with the operators and agents here and we are slowly starting the preparations to have everything ready by March, when I’ll return.”

Kostas Katsouranis arrived in Melbourne, to play a play for the team of Heidelberg United against Melbourne City (a Manchester City affiliate team), as part of the FFA Cup quarter-final.

A Greek Community Board delegation welcomed Katsouranis at the community center, consisting of Greek community president Bill Papastergiadis, vice president Dimitris Bosinakis and board member Paul Iliopoulos. Furthermore, Greek community benefactors Greg Stamboulidis and Peter Abraam as well as Greek Diaspora media representatives were also present during the meeting with the Greek football player. Katsouranis was accompanied by the Heidelberg United coach George Katsakis and other team representatives, such as Harry Tsalikidis.