Greek singer Chrysanthi-Pagona Pitiropoulou, most commonly known as Chryspa, amazed the crowd in Australia. She made a great impression during her performance on September 18th, at Kinisi nightclub in Melbourne.

Chryspa charmed the nightclub patrons with her voice, smile and dance, while she urged all of her fans to get up and dance on and off stage along with her. After her performance in the popular nightclub she returned to Greece where she will prepare for another creative and busy season. 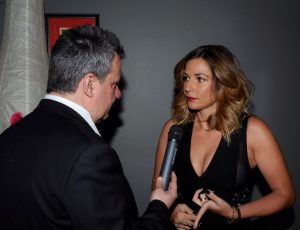 A few moments before going on stage she stole a few minutes to speak with Greek Reporter’s correspondent in Melbourne Babis Petrakis. She spoke about her short visit to Australia, as well as her future plans. She noted that this was her first time visiting the country. “When the event organizers Elisavet Kokkinaki and Hadi HArik from Hk Entertainment called me I was excited and I accepted without a second thought, even though the journey was long and I came here for a one night performance. I was moved that the Greek-Australians in the area wanted to honor me and support my work,” she said. “I want to thank them from my heart and tell them that it has been a great honor.”

In regards to her plans for the future she said that she had already started rehearsals for this winter season when she will be performing at the Greek nightclub Frangelico, along with famous Greek singers Antipas and Christos Menidiatis.

She also added that she was planning on appearing in a children’s play entitled “A Beauty… Beast,” at the Theatre of Athens, along with Maria Korinthiou, Petros Bousoulopoulos and Nikos Christidis.

Parthenon Sculptures Should Return to Greece, the British Say in New Poll