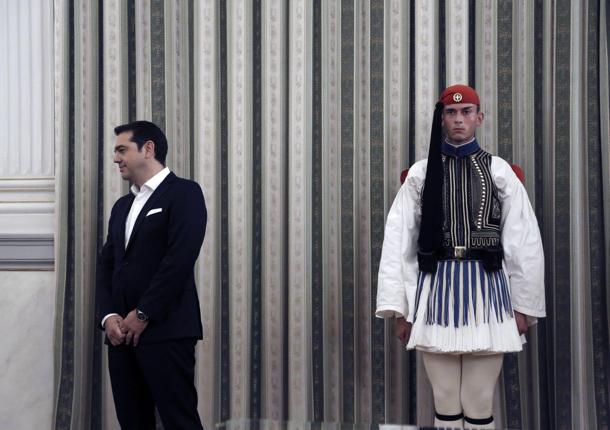 According to foreign media reports, Greece’s newly re-elected Prime Minister Alexis Tsipras showed that he is planning on continuing on the path he already set before the elections, following the agreement lines. Most articles made note of the fact that Tsipras chose to make a coalition government with the Independent Greeks – as before – avoiding major changes in the government cabinet, while they also focused on Greek Finance Minister Euclid Tsakalotos and Deputy Finance Minister Giorgos Chouliarakis, as well as the new government’s response to the refugee and migrant issue.
“Greece’s newly re-elected left-wing government has retained Euclid Tsakalotos as finance minister to continue tough negotiations with other Eurozone countries on the terms of a large new bailout deal. The new Cabinet of Prime Minister Alexis Tsipras was announced late Monday, and included few major changes to ministry posts,” wrote Associated Press.
“Tsipras presented a new government of his trusted people,” notes the French Monde, adding that the cabinet’s organizational structure is close to that of the previous government, with few exceptions. It appears that Tsipras made the choice to reward the politicians who remained faithful to him after he signed the third bailout program. Furthermore, the French newspaper made a special reference to former caretaker government members Giorgos Chouliarakis and Giannis Mouzalas who will be part of the new cabinet in the Finance Ministry and Interior and Administrative Reconstruction Ministry, due to their involvement with the critical refugee issue.
The German Frankfurter Allgemeine Zeitung wrote that Tsipras chose most of his old colleagues, not wanting to waste any time in forming a new cabinet. “Euclid Tsakalotos was once again sworn as Minister of Finance while the government will also have a deputy finance minister charged with monitoring the implementation of the agreement,” noted the newspaper. It also added that Nikos Kotzias would be returning to the Foreign Ministry.
The Italian Stampa adds that there are few changes compared to the previous government, due to the fact that SYRIZA is missing several of its left-wing members who left the party after the third bailout was signed. El Pais also notes that Tsipras handed the wheel of Greece’s economy to Euclid Tsakalotos. “The new Greek government has been formed, but it’s not so new after all.”
“Greece’s newly re-elected prime minister, Alexis Tsipras, decided on Tuesday on a new cabinet with few new faces and returned the critical job of finance minister to Euclid Tsakalotos, the low-key economist who made headway with his eurozone peers in bailout negotiations. Under pressure from Greece’s European partners to start work on a barrage of economic reforms underpinning the country’s third bailout, Mr. Tsipras kept his core economic team essentially intact,” wrote the American New York Times.