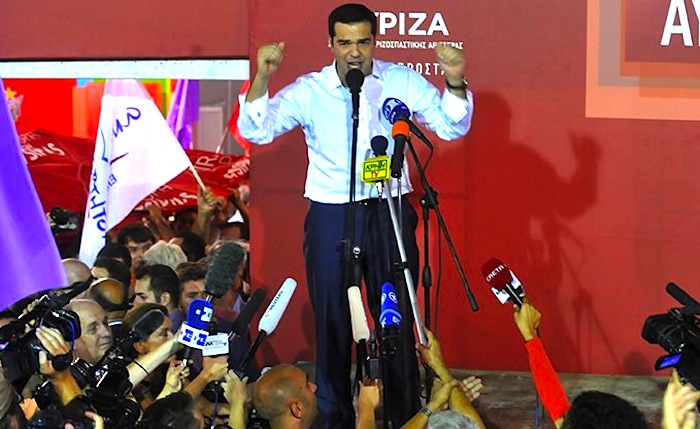 Alexis Tsipras won Sunday’s elections and is to be sworn in as the country’s prime minister on Monday afternoon. He has already announced that he will form a coalition government with Independent Greeks (ANEL).
Tsipras stated that the electoral result has sent a message that Greek people want change and a stable government for four years.
In the afternoon, President of the Hellenic Republic Prokopis Pavlopoulos will give Tsipras the mandate to form government.
The SYRIZA leader managed a clear victory with 35.53 percent of the votes, followed by New Democracy with 28.05 percent. The leftist party’s win secures 50 bonus seats in the 300-strong parliament, thus giving SYRIZA 145 seats.
Along with the 10 seats of Independent Greeks of Panos Kammenos, Tsipras will form a coalition government like he did in January.
As soon as the election results came out, Tsipras spoke briefly to his followers gathered outside of SYRIZA’s electoral center. Then he invited Kammenos and they both greeted the crowd.
Tsipras thanked his voters and promised that he will complete his four-year term bringing the reforms the country needs and fighting corruption and vested interests.
Tsipras told the press that the new government will be announced on Tuesday, after a SYRIZA meeting scheduled at 1:00 pm on the same day.
On Wednesday, Tsipras will attend the emergency European Council meeting on the migrants issue where he will also represent Cyprus Republic President Nicos Anastasiades, by request of the latter who is in the United States.
On Sunday, Tsipras will attend the United Nations conference, where he is expected to meet with U.S. President Barack Obama on the sidelines of a reception for country leaders.