GRNews
GreekReporter.comGreeceAlexis Tsipras Inaugurated as Greek Prime Minister for the Second Time in... 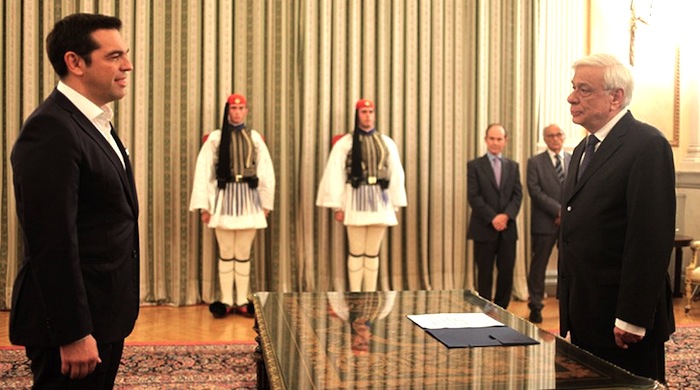 SYRIZA leader Alexis Tsipras swore a political oath on Monday evening, to become Greece’s Prime Minister just 30 days after abdicating his post.
Tsipras was sworn in as prime minister in a short ceremony at the Presidential Palace.
Earlier in the day Tsipras met with Hellenic Republic President Prokopis Pavlopoulos to officially receive a mandate to form a coalition government given that his party was unable to win an absolute majority during Sunday’s election. Tsipras informed Pavlopoulos that he has already found a coalition partner.
The Greek Prime Minister will form a coalition government with SYRIZA’s former coalition partner the Independent Greeks (ANEL). The two parties have 155 parliament members combined, with the required minimum number of MPs a government must have being 151.
The new Greek government is expected to be announced and officially sworn in on Wednesday, according to media reports.
International Leaders Congratulate Tsipras
German Chancellor Angela Merkel called Tsipras on Monday to congratulate him on his party’s electoral victory.
“On this occasion, the Chancellor and Alexis Tsipras already exchanged views about the upcoming special meeting of the European Council next Wednesday (23/09) and agreed to a closer cooperation on the issues which will be discussed, as well as other bilateral and European issues,” the Athens-Macedonian News Agency quotes German government spokesperson Steffen Seibert as saying.
Tsipras received a congratulatory phone call from European Commission President Jean-Claude Juncker.
Italian Prime Minister Matteo Renzi, who congratulated Tsipras via a phone call on Sunday evening, made further comments on the Greek election results on Monday.
“I am forced to conclude that secession works as a threat, but somewhat less during elections. Whoever injures with secession, dies in the elections. And this Varoufakis, to use let’s say this technical term, we got rid of him. That is not the issue. The issue is whether in contemporary Europe there is or there is not a relation between democracy in the form of government and the demos and the European ideal. But also in the form of regulations, the laws, the guidelines that the EU has,” he said according to Kathimerini newspaper.