TechNews
GreekReporter.com Greece Tsipras: Today, the Greek People Will Give a Mandate of Continuity and...

Tsipras: Today, the Greek People Will Give a Mandate of Continuity and Stability 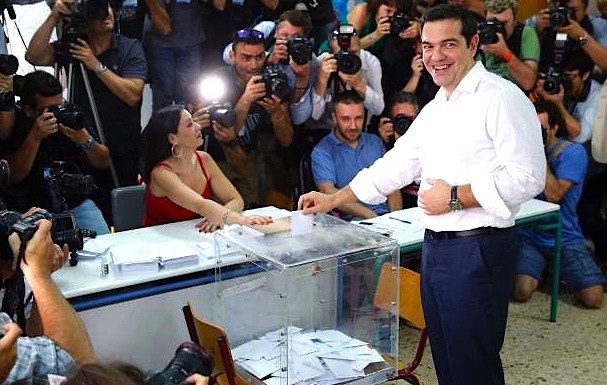 As Greeks lined up Sunday morning to vote, Alexis Tsipras called for stability after casting his ballot.
“Today, the Greek people will … give a mandate of continuity and stability and a strong government with a four-year horizon,” Tsipras said. “That is what our country needs. But the mandate will also be for a government that will fight with the same decisiveness for the rights of our people, not only in Europe but within the country.”
Saying that he wants Greece to be a strong and equal partner in Europe, Tsipras also underscored the need to provide economic hope, especially for the country’s youth.
About 9.84 million people are eligible to vote in Greece, and while elderly voters make up a significant portion of overall ballots cast, many see undecided youth and female voters potentially swinging last-minute trends.
Calls for stability were also made by other parties, many of which recognize widespread public fatigue with both political and economic uncertainty.
“We are ready for compromises,” said Stavros Theodorakis, the leader of To Potami, a smaller pro-Europe centrist party. “We have to forget things that we have been saying during the campaigns if these things were sharp, and we have to exclude the possibility of elections again.
“Everyone has to make compromises so the country can be governed.”
New Democracy’s leader, Evangelos Meimarakis, has also called for conciliation and said he is open to the possibility of a grand coalition. Upon casting his ballot, he said Greece wants “to get rid of the lies, the misery of those who are pretending to be something, and with their ballots, they want to bring back truth.”
(source: DPA)