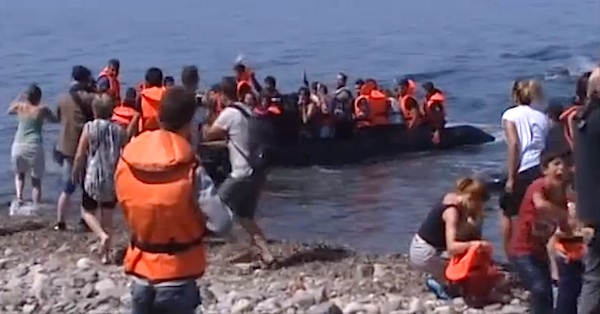 A five-year-old girl who drowned and six more refugees missing is the count of a new maritime tragedy off the island of Lesvos on Saturday, adding more victims to the long list of refugee lives lost.
Among the missing there is an infant and two women who were trapped in the boat’s cabin, one of the survivors told Greek public radio ERA. So far, 13 people, Iranians and Syrians have been rescued and transferred to Lesvos.
It all started early in the morning off Petalidi island, when water entered a small rubber fishing boat carrying refugees and migrants. The boat capsized and two women and an infant who were in the cabin were trapped.
“Suddenly the engine ran out of fuel and stopped. We tried to find a tank of fuel that was stored on the boat. Water started entering the boat and we tried to throw it out but we couldn’t. When we found the fuel tank it was too late because there was too much water in the boat and it capsized,” the rescued man said to the radio reporter.
“A doctor from Syria was inside the small cabin with her mother and her infant. We told them to come out but they were scared. They were trapped inside the boat as it turned over. We were all in the water, without telephones, all our things have been lost. Two of us tried to swim to bring help,” the man continued.
Coast guard vessels, fishing boats and a Frontex helicopter are currently searching the area for the missing refugees.