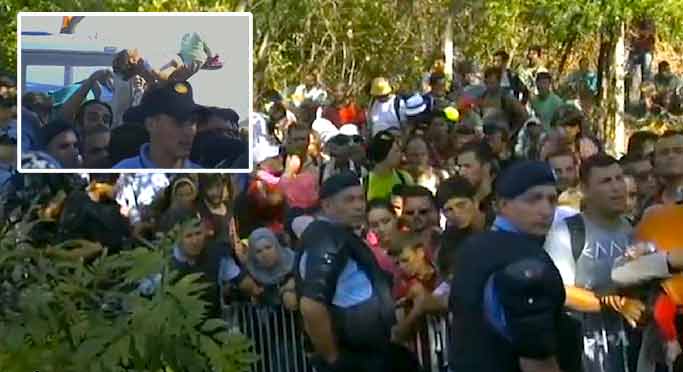 There were harrowing scenes Thursday at Croatia’s border with Serbia as riot police tried to hold back thousands of refugees and migrants who were trying to find a new route to Western Europe.

Croatia had pledged to allow migrants to transit the country, but they did not expect such numbers to arrive so soon. By midafternoon, several thousand had amassed at a small gate at the border town of Tovarnik, demanding to be let through.

Police tried to hold back the crowds, allowing just a few dozen through at a time to be taken by bus to a reception center. Croatian Interior Minister Ranko Ostojic appeared at the scene and said police would exercise restraint.

“We show that we are able, without big accidents and without force, without using police force, we are able to control the situation,” Ostojic said.

But the situation rapidly went out of control.

In the sweltering heat, the tension grew. The migrants tried to surge forward. Riot police pushed back. Stuck in the middle of the crush were children, pregnant women, even babies . Many had no water or food.

Some children were allowed through, limp with dehydration and exhaustion, carried in the arms of their desperate parents. One man collapsed unconscious. Another was reported to have suffered a heart attack.

Some migrants tried to break through a nearby fence but were pushed back through by police. Families were split up. Fathers pleaded to be reunited with their children, screaming with tears in their eyes at riot officers.

Eventually the police lines broke, and the migrants sprinted across open ground toward buses parked on nearby farmland.

Many voiced frustration at the chaos. Iraqi asylum seeker Sadek Abu Jaffir questioned the lack of support for the refugees.

It was unclear what Croatia would do with the migrants.

The government said it could not accept any more refugees. But it faced a tough dilemma: Follow Hungary’s lead and close the border, risking more scenes of chaos, or allow the migrants through, most likely prompting thousands more to follow the same path.
(source: VOA)

The "Lap Pool House," a modern house built on a slope of the Cycladic island of Tinos, is nominated for an EU award for Architecture.
Cyprus