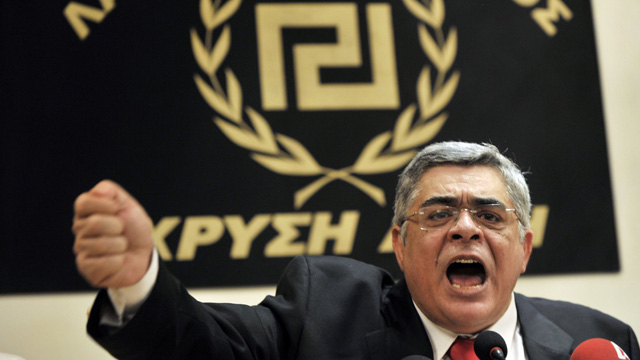 Golden Dawn leader Nikos Michaloliakos assumed political responsibility for the murder of rapper Pavlos Fyssas, but claimed there is “no criminal liability.”
Speaking on Real FM radio on Thursday, the extreme-rightist party chief denied all allegations that he is a believer in the Nazi ideology and that Golden Dawn is not a fascist party but they believe in democratic procedure and are patriots.
Michaloliakos said that imprisoning the Golden Dawn MPs for the murder of Fyssas was a political act and considers the party’s jailed lawmakers political prisoners, accusing the New Democracy-PASOK coalition government for conspiring against “the third political power in Greece.”
The Golden Dawn general secretary defended himself and the party saying that “you cannot hold a whole political party responsible because one of its fans, one of its followers, committed a reprehensible act.” However, he assumed political responsibility for the act.
Fyssas, a rapper and leftist activist, was slain by Golden Dawn party member Giorgos Roupakias on September 18 2013. Although the party denied any association with the murder, it was proven that Roupakias had placed a phone call to Michaloliakos prior to the murder. The party leadership were then accused of the murder and his leadership group was jailed. Currently they are on trial on charges of forming and running a criminal organization.