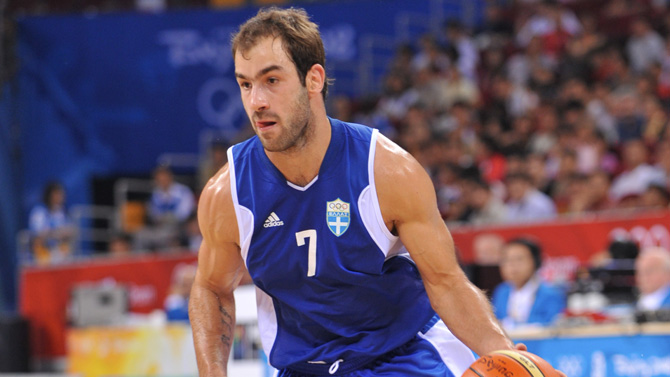 The Greek Men’s Basketball Team made a big comeback to win Latvia 97-90 in the FIBA Eurobasket 2015 on Thursday, thus securing a place in the 2016 World Olympic Qualifying Tournament for Men, in what proved to be Vassilis Spanoulis’ last game for Greece.
Having lost the first two quarters to Latvia, Greece found itself trailing by 39 to 54 with a little over five minutes to go in the third. The Greeks rallied together and went on to a 24-5 point run to turn things around. Although Latvia won the quarter 61-60, Greece had a significant boost in morale and eventually finished the game seven points ahead of their opponents and fifth in the tournament.
Greece had strong individual performances with Giorgos Mpourousis scoring 20 points, while Giannis Antetokounmpo and Nick Calathes had 15 points each.
Victory over Latvia means that Greece will play in one of the three World Olympic Qualifying Tournaments for Men. The winners of these three tournaments will qualify for the Rio De Janeiro 2016 Olympic Games.
As Greece’s tournament came to an end, Vassilis Spanoulis, one of Greece’s most prolific players, announced that he is retiring from the Greek National Basketball Team. Spanoulis, who scored 16 points against Latvia, has been a part of Greece’s major basketball successes since 2000. He helped the Greek team win the FIBA Eurobasket in 2005, come in second in the 2006 FIBA World Championship and collect the bronze medal in the FIBA Eurobasket 2009.