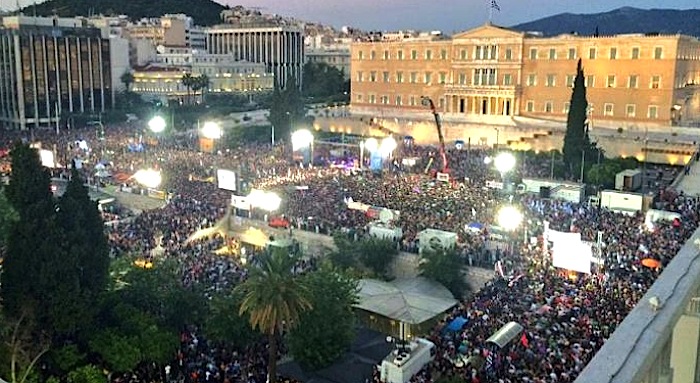 Popular Unity and the PASOK-DIMAR alliance started the major pre-election rallies in the Greek capital on Tuesday evening.
Less than eight months after the party campaigns that culminated in the January 25 election, the people of Athens are gathering again at the city’s major squares to listen to the party leaders’ arguments.
On Tuesday, the newly-formed SYRIZA offshoot Popular Unity had their major Athens rally at Omonoia Square at 7:30 pm. Zoe Konstantopoulou, the former house speaker, addressed the party’s potential voters.
At the same time, about 150 meters away, at Kotzia Square, the PASOK-DIMAR alliance had their rally in Athens, with PASOK leader Fofi Gennimata pitching for the Athenians’ vote.
On Wednesday, the general secretary of the Greek Communist Party (KKE) Dimitris Koutsoumbas will address party members at Syntagna Square at 8 pm.
On Thursday, New Democracy leader Vangelis Meimarakis will speak in front old and new party voters along with the undecided trying to persuade them to give him first place on Sunday’s ballot.
The same day, Centrist Union leader Vassilis Leventis — who fares unexpectedly well in polls — will speak to his fans and voters at Peroke theater at Karaiskakis Square, at 8 pm.
Friday is the big day for Alexis Tsipras who lost a lot of followers and MPs after signing the bailout agreement in July. Tsipras will try to win some of them back in a big rally at Syntagma Square that will be broadcast on big screens at the main squares of all region capitals across Greece. The SYRIZA rally will be held at 8 pm.