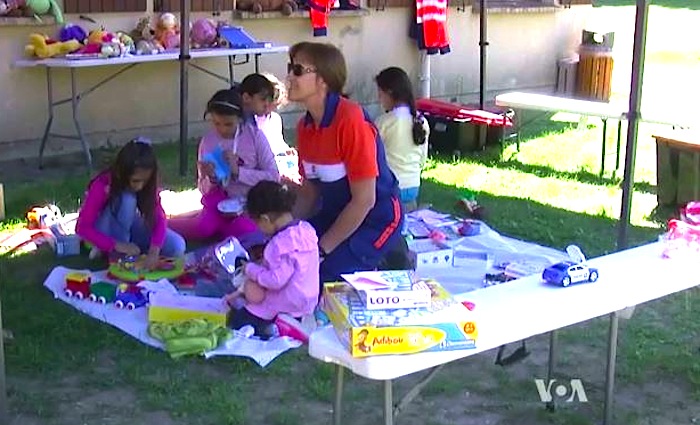 As Europe continues to bicker over sheltering tens of thousands of refugees fleeing conflict, public opinion in France has changed in favor of the Iraqis and Syrians who are beginning to arrive. France has pledged to take in more than 24,000 refugees over the next two years.

For a select group of Iraqis and Syrians, the perilous journey by foot, boat, train and bus winds up at the Cergy-Pontoise recreation center located in a suburb of Paris — at least for now. Hundreds are being bussed from Germany, which is grappling with a record influx of asylum seekers.

Recreation center head Silvain de Smet says the refugees arrive exhausted. They are fed and meet with officials from different government services, who also check to see if they need medical or psychological care.

“I saw a child die and blood everywhere and destroy everywhere. I saw horrible things,” confides Omar Abdulmunam, who fled his home in the heavily bombarded Damascus suburb of Douma 25 days ago.

“I escaped from Douma to Damascus, and from Damascus to Lebanon, Turkey, Europe, FYROM, Serbia, Hungary, here,” he told VOA.

Ali Tarabien also came from the Damascus area. Like everyone here, he arrived by overnight bus from Germany.

“To be honest, I tried to stay in Germany; but, I see the French people there. I talk with them for maybe four hours. They promised it’s like Germany, maybe better for me …because I want to bring my family,” he explained.

Like elsewhere in Europe, the French are divided over the flood of asylum-seekers.
People here are bringing clothes and toys for the refugees, who will be moving to more permanent housing in a few weeks — including in French homes. But the far-right opposes more newcomers and conservative politicians want limits. Two French mayors say they will only take in Christian refugees — not Muslims.

A new poll indicates French public support has swung in favor of taking in more refugees, compared to just one week ago. Many here hope the warm welcome will last.
(source: VOA)