GRNews
GreekReporter.comGreeceGreek Elections: Political Leaders Debate was 3 Hours About Nothing

Greek Elections: Political Leaders Debate was 3 Hours About Nothing 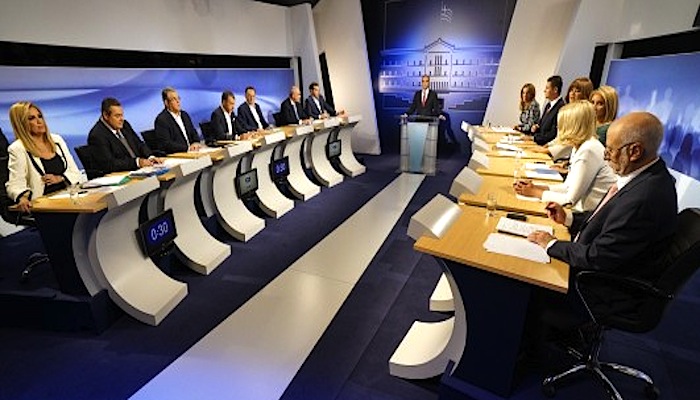 The much awaited debate between the leaders of the seven political parties was a three-hour long blame game full of empty slogans, repeated accusations, sarcastic remarks, hypocritical statements and blatant lies.
The only thing missing was a political agenda, a promise of some kind of policy at a time when Greece is on the brink of economic collapse, while facing a refugee and migrant influx that threatens to generate a humongous-scale humanitarian crisis.
It saddens one to think that the seven people who “debated” on Wednesday night are the country’s political elite, the party leaders who will ask the Greek people to give them the mandate to govern the country. The poverty in ideas and arguments and the evident lack of honesty on the debate table was truly embarrassing and an insult to anyone’s intelligence. So much that after three hours of roguish blabber you would think that these people could not save a newspaper kiosk from bankruptcy, much less a country.
This debate made blatantly evident that these people are professional politicians and their only job is to sit in parliament and receive fat paychecks and all the perks the job position entails. As for getting elected to save the country? That would be a bitter joke.
One can imagine that those of the hundreds of thousands of Greeks who have migrated during the crisis and watched Wednesday’s debate are now on their knees thanking God for their decision to leave. Those unlucky ones still in Greece would probably apply for passports within the next few days. The caliber of the party leaders that on September 21st will take the country in their hands is so low that Greece will come out of the crisis when hell freezes over.
All political leaders expertly avoided to talk about a solid program for the next day. It was all empty talk and wishful thinking. Words like development, growth, progress, social justice, fairness, prosperity, sounded like hubris coming from the lips of these people who used them so often while they knew they were outright lies, or at least unachievable goals.
Alexis Tsipras spoke of brave battles, fights, wars he gave against invincible enemies and tried to prove that the bailout agreement full of harsh austerity measures was a success, but also said he will renegotiate some of them. He accused New Democracy and PASOK of accumulating 340 billion euros in state debt, but he never mentioned the 90 billion he signed for.
Vangelis Meimarakis was full of irony and sarcasm against Tsipras and he looked bored throughout the proceedings. He accused Tsipras of lying to the Greek people by promising things he could not deliver.
ANEL leader Panos Kammenos was also wishy-washy about the memorandum he voted for and accused everyone else except his coalition partner Tsipras. He said he is open to a coalition government, but he wasn’t clear as to whom he would ally with.
PASOK chief Fofi Gennimata spoke of the rejuvenation of her party, stressed the importance of Greece staying in the euro and gave Tsipras the “golden raspberry award” in economics.
Stavros Theodorakis was a little more specific about the pro-Europe, pro-growth, policy his party, To Potami, would follow and bragged about the great academics who put in the ballot of his party. He also created a slogan paraphrasing the “Left for the first time” of SYRIZA. He said that the next government should be “Serious for the first time.”
Panagiotis Lafazanis of SYRIZA offshoot Popular Unity used the word “memorandum” about 1,467 times and promised a new leftist Greece where everyone will be rich, happy and equal when out of the European Union and NATO and with the drachma as national currency.
Dimitris Koutsoumbas of the Greek Communist Party (KKE) repeated the party’s solid anti-Europe, anti-NATO, anti-memorandum rhetoric and justified his paycheck.
Of course none of the political leaders made a proposal about the next day. No agenda or policy was discussed. It was all wishful thinking, as if by voting for them, all of a sudden 1.5 million jobs will be created, new businesses will open, the refugees will allocate themselves in the country of their choice, 20,000 school teachers will miraculously show up at short-staffed schools on Friday and everybody’s table will be brimming with lobster and caviar.