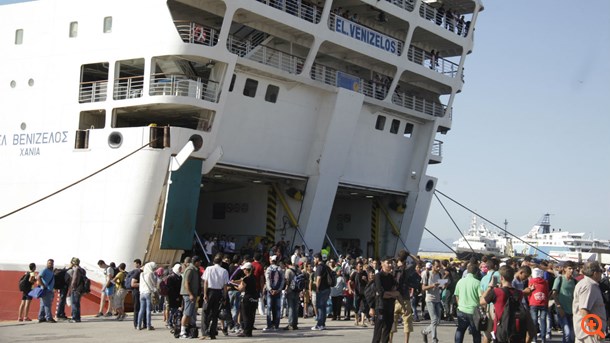 Greek Alternate Minister on migration policy Yiannis Mouzalas announced on Sunday new measures to tackle the humanitarian disaster developing in Lesvos with the throngs of refugees and migrants arriving daily on the island.
Speaking at a press conference shortly after vising the reception centers of Kara Tepe and Moria, as well as the port of Mytilene, Mouzalas said the situation is “manageable but is very close to getting out of hand.” He said the aim for the next few days is to “relieve the island and lessen the difficulties for locals and refugees.”
The measures, which will be effective starting Monday, are the following:
1.Two additional daily ferry routes from Lesvos to Piraeus, apart from the regular routes. The ships will be “Terra Jet” and “Pegasus, while in case of emergency the “Blue Star Patmos” will also contribute. The car ferry “Eleftherios Venizelos” will be permanently stationed in the port of Mytilene and will be used by refugees who have been identified. When 2,500 people are onboard, the ship will travel to Athens and return to the island.
2.Increase the identification process. Police and Coast Guard have already sent 60 officers while specialized equipment is expected to arrive on Monday.
3.The army will contribute by baking 1,500 loafs of bread daily, while its personnel and means will be used to create a new reception facility in the old military camp in northeastern Lesvos.
4.Creation of a new identification center north of the city, in the old Kourtzi military camp.
The mayor of Lesvos, Spyros Galinos, who was present at the press conference, warned that his position if the situation does not improve, is that the municipality will not set ballots for the elections and will not open schools following Monday.
(Source: ANA-MPA)