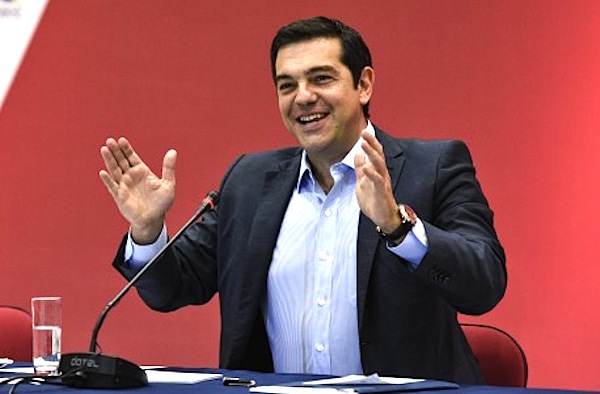 Former Greek Prime Minister Alexis Tsipras commented on his seven month term as prime minister as well as the September 20 Greek elections during a press conference at the 80th Thessaloniki International Fair (TIF).
Tsipras reiterated his commitment to implement the prescribed reforms of the third Greek bailout and to explore new counterbalancing policies if he emerges victorious in the elections. The former Greek prime minister argued that his government fought for and ultimately brought a better deal for Greece than the previous Greek governments.
The SYRIZA leader further accused New Democracy of trying to lay the blame of Greece’s situation on SYRIZA’s rule. Tsipras asked the Greek voters to give his party the mandate to rule and later argued that his party can make the necessary changes in Greece while”New Democracy simply has a program that concerns the demands of the creditors. We have the deal we brought, along with a number of open fronts that we will claim and negotiate, and a number of initiatives that can take the country forward, that can relieve it of the collar and the guardianship and this hostage situation that we have been in for the past five years,” he said.
Tsipras also addressed the schism in SYRIZA, which began when he endorsed a third Greek bailout and which ultimately led to then SYRIZA MP Panagiotis Lafanzis forming a new party called Popular Unity that also garnered support of former SYRIZA MP and former Greek Parliament President Zoi Konstantopoulou. According to the former prime minister, SYRIZA, which was formed by a number of different subgroups, was not able to become a unified party.
“We’ve been led to these elections because a portion of SYRIZA parliament members decided to vote against the agreement and form a new party,” he said and added that the party is now wiser and has better cohesion.