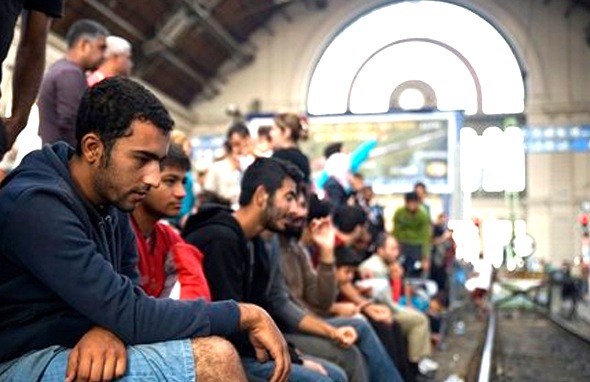 The United Nations High Commissioner for Refugees (UNHCR) has described the migrant crisis in Europe as an “absolutely dramatic situation” and has called on the European Union to take charge of migrant processing centers.

Commissioner Antonio Guterres said the refugee crisis is a “defining moment” for the European Union and if the EU remains divided on the issue that will only benefit smugglers and traffickers.

A UNHCR spokeswoman, Melissa Fleming, told VOA Friday that the crisis has exposed differences in attitudes and policies of the EU member countries. She called for processing centers to be established under the auspices of the U.N. and the International Organization for Migration.

The migrant crisis led the agenda at an informal meeting of EU foreign ministers in Luxembourg Friday. The EU’s top diplomat, Federica Mogherini, said the issue of searching and diverting smuggler vessels, first discussed Thursday in the meeting of defense ministers, would continue to be a topic.

“Migration and refugee crisis for sure will be the heart of our work in these two days, as it was the case also with the defense ministers yesterday when we discussed the transition to phase two of our operations in the Mediterranean against the traffickers and the smugglers,” she said. “With the foreign ministers, I expect we will focus mainly on our work with third countries, countries of origin and transit.”

“We have to get into another mode of cooperation. The spirit of this and future meetings has to be one that says Europe can’t allow itself to be divided up even in the face of such a challenge,” he said.

In a letter to Mogherini, the governments of Italy, France and Germany were expected to push for a European system to repatriate more migrants who fail to qualify for asylum and to improve external border controls.

Train corridor proposed
The Czech and Slovak interior ministers, however, said Friday that their countries would consider a train corridor for migrants traveling to Germany from Hungary if Hungary and Germany agree on how to deal with the influx of migrants. The Czech Republic and Slovakia are situated on the main train route that connects Germany with Hungary.

Meanwhile, the Hungarian parliament passed new laws to stem the inflow of migrants.
About a dozen migrants escaped Friday from a camp at Roszke near the Hungarian border with Serbia and many as 300 others tried to leave the camp to continue their journey to western Europe. The escapees were later detained by riot police on the highway. 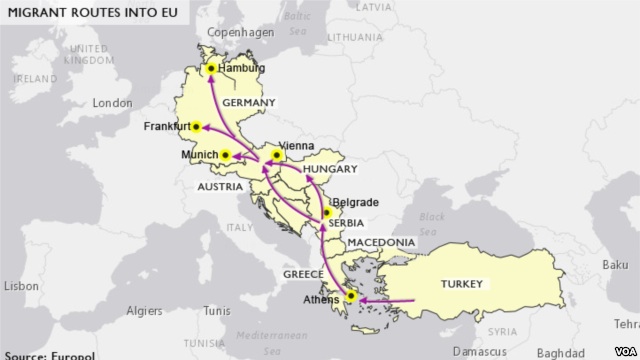 In the Hungarian city of Bicske hundreds of refugees refused to get off a train they had boarded in the hope of reaching Germany, which says it is willing to take up to 800,000 refugees. Hungarian authorities insist EU regulations require them to register the migrants before they can leave for Germany.

Officials in Bicske say only 16 people exited the train voluntarily to be registered at a refugee camp. Hundreds of others remained on the train, chanting “no camp!” and “Germany, Germany.”

Britain’s Prime Minister David Cameron said Friday that Britain will accept “thousands more” refugees from Syria, adding to the 5,000 it has already agreed to. Cameron said the decision was a response to “the scale of the crisis and the suffering of people,” making the announcement after a meeting in Lisbon with the Portuguese prime minister.

At least 30 migrants are feared to have drowned off the coast of Libya after their boat began to capsize, according to the International Organization for Migration. In a statement U.N.: Refugee Crisis Is a ‘Defining Moment’ for Europe , a spokesman told reporters 91 migrants were rescued from a sinking inflatable boat began to sink.

Desperate measures
Hundreds of thousands of migrants from Syria, Afghanistan and Iraq have been taking desperate steps since January to reach the European Union, trying to escape war and poverty for safety and opportunity.

Greece and Italy have been the first stops for many of the migrants after making the dangerous crossing over the Mediterranean.

French, German and Italian leaders said Thursday there must be a compulsory and fair distribution of refugees across the EU.

European Parliament President Martin Schultz said EU member states, with a population of over 500 million, could absorb large numbers of refugees without any problem, as long as arriving migrants are not concentrated in only a few countries.
(source: VOA)