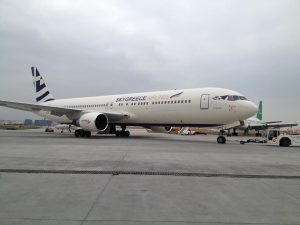 SkyGreece, an airline based in Greece, cancelled three of its flights from and to the Toronto Pearson International Airport on Wednesday.

According to reporter Cindy Pom, the plane is parked at the Pearson airport because the company has not paid landing fees to the airport. She further alleges that she spoke to the president and one of the company’s co-owners, Ken Stathakis, who labeled rumors that the company is going bankrupt as “a bunch of BS.”

The airline faced a similar situation last week when SkyGreece flights from Toronto Pearson International Airport were continuously being delayed. As a result, people were left waiting for their flights in the airport for days. The company’s plane that was parked in Pearson airport ultimately flew on August 20, four days after it was originally scheduled.

SkyGreece was founded in 2012 by Greek-Canadians. Its fleet consists of two aircraft that transport passengers from and to Toronto from European destinations.

In response to a City News inquiry, Father Nicholas Alexandris, one of the company’s reported co-owners, directed the network to speak to the other co-owners. The network further reported that Alexandris apologized to a customer and informed them that he quit the company’s board two weeks ago.

Visiting the Greek Gods on Mount Olympus and Litohoro