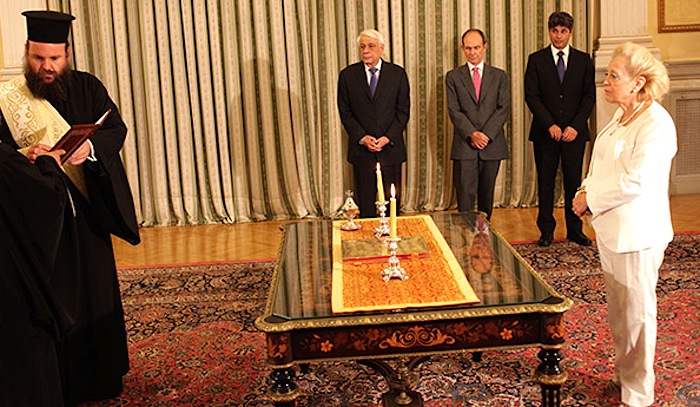 Vassiliki Thanou-Christophilou became Greece’s first female Prime Minister on Thursday evening.
Thanou, the former Greek Supreme Court President, was sworn in on Thursday evening by the President of the Hellenic Republic, Prokopis Pavlopoulos.
Following the resignation of former Greek Prime Minister Alexis Tsipras and the inability of the other political parties to form a new government, Thanou was named the country’s transitional Prime Minister until snap elections are held. She assumed Greece’s leadership in accordance with Greek law, which dictates that in the event that the country is left without a leader, the head of the supreme court should take over until the elections.
The official date of the elections has yet to be announced.
Who is Vassiliki Thanou?
Thanou is Greece’s Supreme Court President as of July 1, after the retirement of her predecessor, Athanasios Koutroumanos. Her appointment was a recommendation of Justice Minister Nikos Paraskevopoulos. Before her appointment she was Supreme Court Vice President as well as President of the Greek Prosecutors Association.
Thanou also serves as President of the Electoral Court as she is the oldest of the Vice Presidents of the three higher courts of the country (Council of State, Supreme Court and Court of Auditors). The Electoral Court examines appeals against the validity of parliamentary elections, European elections and referenda.
Born in Chalkida in 1950, the Supreme Court Judge graduated from the Athens School of Law with post-graduate studies at the Sorbonne University on European Law.
Thanou entered the judiciary body in 1975 and was promoted to President of the First Instance Court in 1992, to appellate in 1996 and President of the Appeals Court in 2005. After her promotion to Supreme Court Judge in 2008, she became Vice President of the Supreme Court in 2014.
For the past six years, she teaches Civil Law at the National School of Magistrates. She is married and has three children.