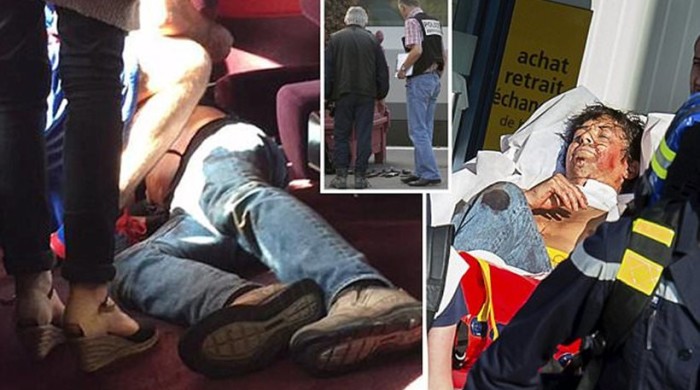 A man attacked civilians on a French high-speed train (TGV) traveling from Amsterdam to Paris, on August 21. The gunman wounded three people before being overpowered by the passengers, including a Greek-American soldier Alek Skarlatos.

The train eventually stopped at the Arras station in northern France where the suspect was arrested. French officials claim the gunman’s motives are not known, but say anti-terrorism police are leading the investigation.

The gunman was identified as a 26-year-old of Moroccan origin and French police say he was armed with an automatic weapon and a knife.

French Interior Minister Bernard Cazeneuve said on Friday that two U.S. citizens helped to disarm the attacker. “Without their courage, we would have faced a terrible tragedy,” he said.

Greek-American soldier Alek Skarlatos, said his friend, who is also in the military, had been injured while he grappled with the gunman, but eventually they got the attacker under control. “I just got back from Afghanistan last month, and this was my vacation from Afghanistan,” the 22-year-old soldier said.

Local media have confirmed that one of the two soldiers who overpowered the gunman was wounded, however, it was stressed that his injuries are not life-threatening.

French Minister Cazeneuve urged caution over the nature of the attack, which is being investigated by a prosecutor. “As always where an act that could be terrorist in nature is involved, the greatest care and the greatest precision will be used,” he said.