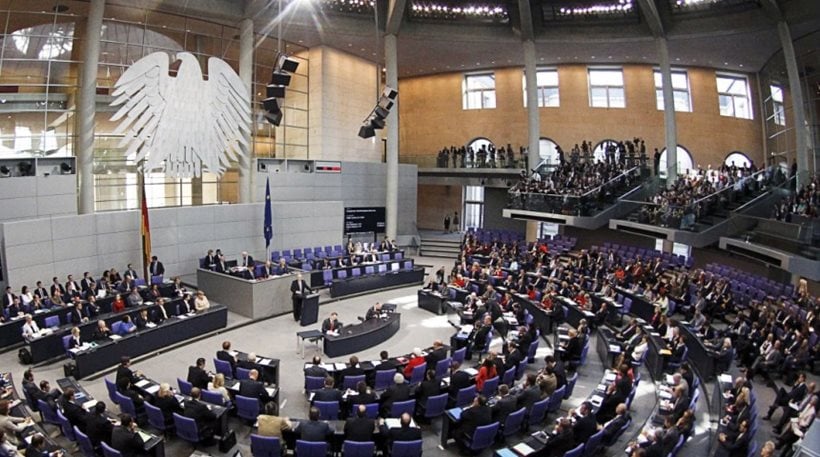 The German Bundestag approved on Wednesday Greece’s third bailout agreement after Chancellor Angela Merkel lobbied her party’s lawmakers stressing that the deal is in Europe’s interest.
After a three-hour session, the majority of the German lower House voted in favor of the three-year program that would lend Greece 86 billion euros. The main condition is that the Greek government will implement austere reforms that would bring its ailing economy back on track.
Merkel managed to get 454 votes in favor of the loan, with 113 lawmakers voting against and 18 abstentions. For the past week, Merkel and Finance Minister Wolfgang Schaeuble pressed their caucus to vote in favor of the deal claiming that the Greek government has changed its stance and is now willing to implement the much-needed reforms. They also expressed their confidence that the reluctant International Monetary Fund will participate in the program.
“After the experiences of the past months and years, there are no guarantees that all this will work and doubts are always allowed. But given the fact that the Greek parliament has already adopted a large part of the measures, it would be irresponsible not to seize the chance for a new start in Greece,” Schaeuble told lawmakers.
Merkel and Schaeuble faced resistance from their own CDU party even though coalition partners SDU and the opposition Greens expressed their support of the deal ahead of the deal.
The opponents of Greece’s third bailout argued that after five years and two rescue packages, the country is still in debt with no signs of recovering its economy. They proposed that Greece exits the Eurozone claiming that it would be best for Greece and Europe.
Klaus-Peter Willsch, a CDU lawmaker, said: “If we don’t allow the Eurozone to breathe, and that means to allow Greece to exit now with its own currency,” then the euro will fail.