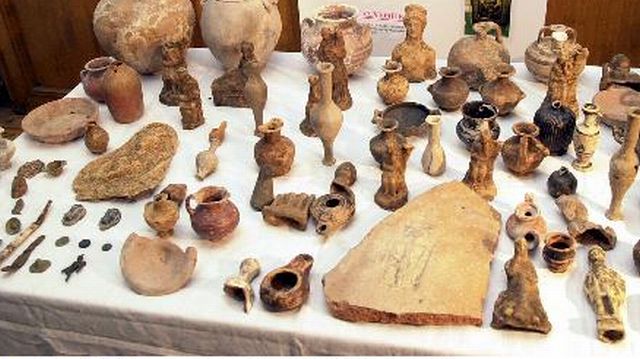 The economic crisis has led many Greeks to antiquity looting and smuggling, with most of them being first-time offenders with no criminal record, says a National Geographic report.
The sharp rise in applications for metal detector permits is an indicative sign. However, a permit is only given to people with no criminal record and after the approval of the Ministry of Culture.
Police detectives and the Department of Antiquities and Cultural Heritage of the Ministry of Culture say that illegal excavations and theft of cultural artifacts have increased in the past five years of the economic crisis. But the profile of looters and smugglers has changed.
Before the crisis, antiquities looters were members of criminal rings who were involved in other criminal activities as well. Nowadays, regular people dig on their own in order to find ancient treasures and sell them.
The economic crisis has made their illegal “job” easier though, as severe budget cuts have left pertinent state agencies understaffed, the National Geographic report says. The resources to limit looting and smuggling are too small and the demand for black market antiquities is large.

“We need more staff, more people,” said Evgenios Monovasios, a lieutenant in the Security Police Division of Attica. He estimated that in all of Greece there are only about 60 employees who work exclusively to prevent and disrupt looting. While cooperation with local authorities across the country expands this capacity, it’s difficult to monitor more than a fraction of the country’s vast and varied landscape, which ranges from the mountainous north to hundreds of islands in the Aegean and Ionian Seas.

“It would take an army to catch everything,” said Elena Korka, General Director of Antiquities and Cultural Heritage. “It’s impossible not to find antiquities in Greece; they are literally everywhere.”
Greek police employ methods such as undercover police work. They gather information, infiltrate looting networks and then conduct raids to retrieve the stolen antiquities.
Most illicit excavations are done at night and the items found are reburied or hidden in locations such as sheep pens and then they are sold to middlemen who own legitimate businesses that can be used to launder the artifacts.
There are also cases where the looters do direct “custom orders” for collectors. The illegal artifacts circulate around the globe and they go from one private collection to another with misleading documentation in different parts of the world so they give the impression of legitimacy.
Since illegally obtained Greek antiquities appear anywhere in the world — from museums to private collections — the Ministry of Culture and pertinent state authorities go into legal negotiations with the owners of such artifacts in order for them to return to Greece. However, for every item repatriated there are several that remain in private collections.

According to the report, recent antiquities trafficking cases range from Byzantine manuscripts stolen from a monastery at Mount Athos and recovered from the Getty Museum and Duke University in 2014 and 2015 to a cache of neolithic Cycladic figurines, vessels, and statue parts confiscated in Attica in 2011 with an estimated value of almost twenty million euros.