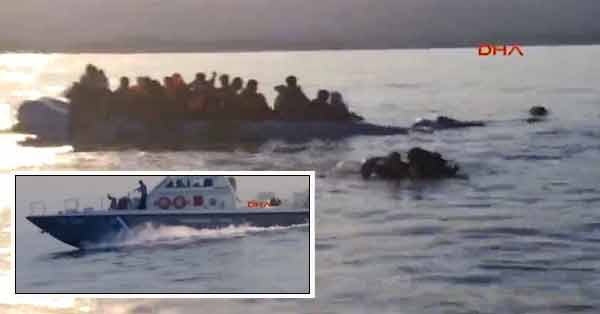 According to a group of Turkish fishermen, the Greek Coast Guard allegedly tried to sink a boat carrying Syrian immigrants on Thursday, Hürriyet daily reported.
The boat, trying to cross into Greek waters, started its journey from the coast of Karaburun in Turkey’s İzmir province.
The fishermen captured video footage that shows the Greek Coast Guard passing by a sinking inflatable boat carrying approximately 50 Syrian migrants. The video does not show the Greek authorities harming the boat, however the fishermen reiterated to Hürriyet that the Greek Coast Guard was responsible for the boat sinking, in an effort to prevent its entry into Greece.
Talking to Greek Reporter,  a representative of the Greek Coast Guard’s Admiral denied that such incident took place.
The Turkish fishermen claim that they witnessed a person “popping” the inflatable boat that was carrying several men, women, and children.
The migrants had to abandon the sinking boat and were rescued by local Turkish fishermen, according to Hürriyet.
İzmir has become a popular destination for Syrians fleeing their war-torn country trying to cross into the European Union through the Greek Islands.
Watch the video below:
https://www.youtube.com/watch?v=-5MCBw1pFL4