GRNews
GreekReporter.comGreeceRefugees and Migrants in Kos to Reside on Greek Passenger Ship

Refugees and Migrants in Kos to Reside on Greek Passenger Ship 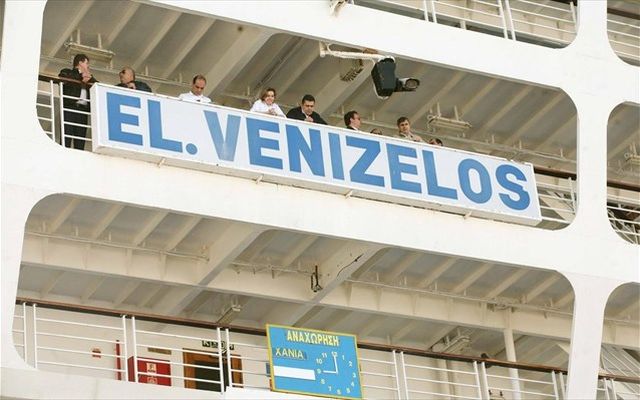 A Greek ship that will host 2,000 to 2,500 immigrants and refugees from the island of Kos is awaiting orders to dock at the island’s port, after running a few hours behind schedule due to bureaucratic delays.
The “Eleftherios Venizelos” is a large passenger ship, with a staff of 110 people, that will host Syrian migrants and refugees currently residing on the island of Kos for 15 days.
Kos is among the Greek islands that have seen an unprecedented influx of migrants and refugees. The United Nations have estimated that between the beginning of 2015 and the end of July, more than 124,000 immigrants and refugees had entered Greece by sea, which amounts to a 750% increase compared to the same time period in 2014.
Kos in particular has been through a tense week, with riots rocking the island on Tuesday, followed by the deployment of two riot police units and scenes of migrants locked in the country’s football stadium under the blistering sun.
The police and coast guard have met the directive to host migrants and refugees aboard the ship with suspicion, amid concerns about the safety of all that will be residing on the “Eleftherios Venizelos.”
In their announcement, they noted that tensions among the various migrants and refugees could cause problems that will be hard to contain given the ship’s structure.
“We ask for the immediate transportation of immigrants from the island of Kos, via this ship, to open, organized facilities in mainland Greece, in order to complete the necessary processes for their identification,” the announcement noted.
On Friday, European Commissioner for Migration, Home Affairs and Citizenship Dimitris Avramopoulos said that the world is experiencing the worst refugee crisis since World War II and noted that Europe is obligated to face the situation and those who seek asylum in a civilized and dignified manner.
The Athens-Macedonian News Agency reported on Friday that 582 undocumented immigrants and refugees had been rescued by the Greek Coast Guard in the past 24 hours in 21 separate incidents close to the islands of Samothrace, Lesvos, Chios, Samos, Agathonissi, Kos and Rhodes.