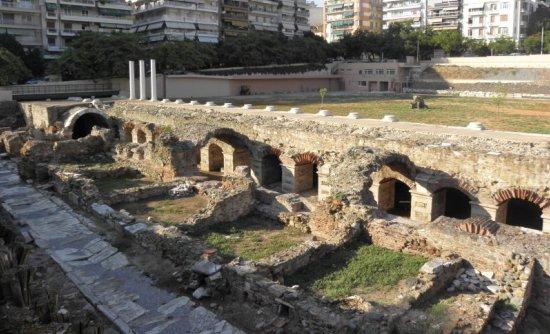 The Urban Picnic Festival in Thessaloniki is an initiative to showcase archaeological sites within the urban city network that are often overlooked. It is a three-day festival that was first organized in 2012 in the Roman Forum of Thessaloniki, with a large turnout of mostly young visitors.
The festival schedule includes a great urban picnic that will be accompanied by concerts of promising music ensembles from across the city and screenings of feature and short films, presented at the specially designed open-air movie theater.
The initiative was undertaken after the official proposal of Greek company Parenthesis, aiming to redefine the use of the Thessaloniki Roman Forum.
From August 26 to 28, city residents and visitors will prepare their baskets and travel to the Roman Forum.
This year, the festival is organized in collaboration with the International Short Film Festival and the selected films will follow a general theme. Last year, the short films followed the theme “journey,” while this year the theme is “heroic,” the heroes that we are looking for in our everyday lives. The festival is also co-organized by the Archaeological Service of Thessaloniki.
The Roman Forum used to occupy an area of 2 acres in the heart of the Roman city when it was constructed in the 2nd century AD. It included public buildings and spaces, and was considered the financial and commercial heart of the city, while also holding an administrative and recreational character.