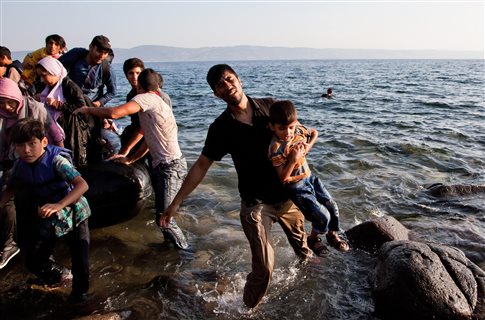 Tens of thousands of refugees and illegal migrants have arrived on Greek islands from Turkey in the past few months, after crossing the Aegean in rickety boats or inflatable dinghies. Most of them arrive from war-torn Syria and Afghanistan. Their purpose is to reach mainland Greece and, for most of them, to move on to more prosperous European countries.

The 1,417 migrants rescued between Friday and Monday were picked up at sea in 59 separate incidents off the islands of Lesbos, Chios, Samos, Agathonisi and Kos.

Local authorities have a hard time accommodating the vast numbers arriving each day. State funds for receiving refugees have been depleted and, in most cases, migrants survive on charity.

It is estimated that about 124,000 migrants have arrived in Greek shores in the first seven months of 2015 alone, creating a huge problem to the crisis-stricken country. According to the United Nations High Commissioner for Refugees (UNHCR), there is a 750% increase, compared to the same period last year. 50,000 migrants arrived in July alone, about 70% of them from Syria.