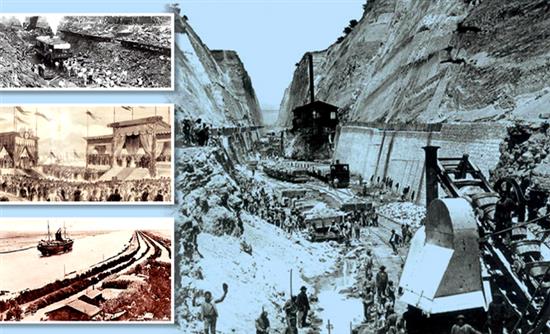 The “new” Suez Canal, which was officially inaugurated on August 6, 2015, changed the world of shipping, doubling the cargo capacity of the original canal, which was built in the mid-1800s.

The nation of Greece has been connected to the Suez Canal since it was first envisioned as a pie-in-the-sky project in the mid-nineteenth century by engineer Ferdinand Lesseps. Greek workers helped build the canal after construction began in 1859, and continued until it was finished, ten years later.

The Greek men who helped make the canal possible were the hard-working natives of various islands such as Kastelorizo, Astypalea, Patmos, Rhodes and Kasos.

Many Greek islanders traveled to Suez, where they worked and put down roots despite horrendous working conditions, such as a lack of clean water, searing heat, and constant cholera and typhus epidemics.

“Lesseps needed staff members, and many looked for better wages. The conditions were certainly difficult. They used to dig with their hands and many people were killed,” noted Christos Kavallis, the president of Cairo’s Greek community.

“They also needed Greek sailors in order to maneuver the ships inside the canal, and thus the community flourished in the Canal. Today a large part of the community comes from the communities that were created all those years ago in Port Said and Ismailia. Initially, at least 4,000 Greeks arrived in the area and many had roots from Kasos.”

What amounted to a mass emigration took place on the island between 1859 and 1866, during the canal construction, and after that many Greeks continued working for the Canal company. Their contribution to the project was acknowledged by Lesseps, who told the natives of Kasos that he wanted to do something for them in return.

The workers asked Lesseps to name the new city that would be built in the area “New Kasos.” However, it had already been decided that the city would be named after Said Pasha; therefore it received the name Port Said.

Despite the name, however, after the passage of a few years’ time, the city had acquired a definite Greek character, as did the nearby town of Ismailia, due to the large Greek community and their churches, shops and schools.

Starting from Port Said on the Mediterranean, and ending in Port Suez on the Red Sea, the modernized canal now boasts a second, auxiliary canal where ships traveling in opposite directions may now pass one another. The improved canal was opened in the summer of 2015.

Exploring the Magical River Cave of Maara in Drama, Greece