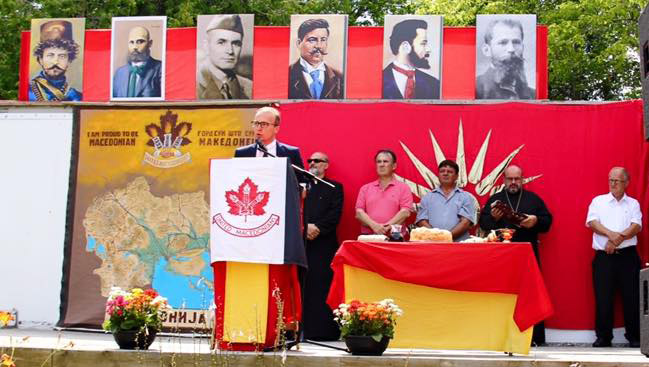 The Parliament Vice President of Former Yugoslavian Republic of Macedonia Antonio Milososki made a provocative appearance at a national celebration having in the background a map that includes several Greek territories reaching to Mount Olympus in central Greece.

The event was held in Ontario, Canada, in collaboration with the nationalist group ‘United Macedonians’ for the anniversary of FYROM’s Day of the Republic/St. Elijah’s feast day (August 2).

The map of “Grand Macedonia” which contains a lot of Greek land, along with the flag with the Vergina Sun, and pictures of Alexander the Great and his father Philip II generated a lot of negative comments in Greece. Especially at a time when the dispute over the name of the neighboring country has not been resolved yet. Milososki, who has previously been foreign affairs minister, represents the nationalistic wing of the Skopje government.

In the past few months, Milososki has made other similar provocations, such as  holding the red flag in his hands, thereby violating the Interim Agreement Athens and Skopje signed in 1995. According to that, the neighbors were bound to stop the use of the symbol of the Sun of Vergina. Last September Milososki and his friends climbed Mount Olympus and were photographed with the spurious flag.

So far there has been no official complaint by the Greek Ministry of Foreign Affairs and Minister Nikos Kotzias.