UN Special Envoy: This Opportunity to Unite Cyprus May Be the Best One We Have 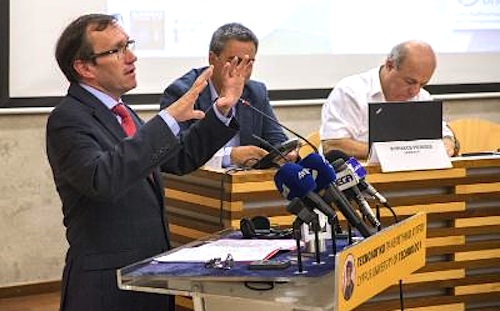 Now there is a moment of opportunity, a window of opportunity that has to be used not only to get to any deal but get to a good deal, and this opportunity may be the best one we have, as Cyprus and as United Nations, UN Secretary General Special Envoy for Cyprus Espen Barth Eide said.
Speaking at a panel discussion in Limassol on Wednesday evening, Eide said there is a unique moment of opportunity and people have to grasp it, pointing out “you cannot leave it just to politicians.”
“I strongly urge Cypriot leaders and all Cypriots to make sure you think of the economic viability of the solution, because you are creating a Federal Cyprus that works economically, creates opportunities for further goals. It is also my sense that today, in this climate, where stars are aligned, Turkey also wants a solution. I know Turkey very well, I know all the top leaders in Turkey from my previous jobs, and I feel very strongly that they also want to reach to a solution”, Eide said.
Eide made special reference to the fact that the event was taking place in Limassol, saying that this is the town where the two Cypriot leaders had dinner last May. “I want to share with you that in that dinner, I immediately sensed during the first minutes that there were two leaders in front of me who were ready to change the future of Cyprus. In all the meetings we had, formal and social, I can say that this has been confirmed”, he pointed out.
The UNSG Special Envoy pointed out multiple times during his speech that there is a moment of historic opportunity, adding that “the stars are aligned, there is trust between the leaders, and there is a will on both sides to really address this matter.”
He expressed hope that he will be able to contribute as someone who is here to help, adding that it is up to Cypriots to solve the Cyprus problem and that nobody else really can. Eide also said that the two leaders, President Nicos Anastasiades and Turkish-Cypriot leader Mustafa Akinci, need support from all the people, academics, people from the business community, the media and the civil society.
“There is a lot of work remaining to be done. I think we will make it but I don’t know and I want to be very honest about it. Great things have been achieved but a lot of work remains before the two leaders will be able to come out and say we have a deal that we will present to the people,” Eide said.
He added that when that happens, the people will be asked and every citizen has one vote. “At that time, you cannot start asking what is actually a Federation, what do the Greek-Cypriots or Turkish-Cypriots do. You have to start thinking now. It is a democratic choice. It’s the people of Cyprus who have to make up their minds and that requires a solid democratic debate, which is why being together with you tonight is very important and there should be more meetings like this”, the UNSG Special Adviser pointed out.
Addressing the panel, Eide said that people cannot leave the solution up to the politicians and that “they need to take this in their own hands.”
“You need to support the people who want to solve the problem, you also need to challenge them, you also have to expect things from them and engage with each other to think about what is this”, he said.
UN-backed talks between Cypriot President Anastasiades and Turkish-Cypriot leader Akinci resumed in May, aiming to reunite Cyprus under a federal roof. Cyprus has been divided since the Turkish invasion of the island in 1974.
(source: CNA)

Countries with Names Deriving from the Greek Language